MILAN (AP) — The Latest on immigration into the European Union (all times local):

The Italian news agency ANSA says an Italian prosecutor has ordered the seizure of the Spanish rescue ship Open Arms and the evacuation of the more than 80 migrants still on board.

The move late Tuesday caps a dramatic day that saw some 15 migrants jump in the sea to escape the ship after being frustrated and angry at the 19 days they were stuck at sea. With the help of Italian rescue workers, those swimmers reached the shores of the nearby Italian island of Lampedusa.

But Open Arms said that made operations on board “desperate” and “intolerable” for the remaining migrants.

Spain tried to end the spiraling humanitarian crisis by dispatching a naval ship to escort the Open Arms back to Spain.

ANSA said Sicilian Prosecutor Luigi Patronaggio ordered the seizure after visiting the ship and meeting with port authorities. Patronaggio is investigating possible charges of kidnapping against Italy’s hard-line interior minister, Matteo Salvini, who has refused to allow the migrants on shore despite offers from six countries to take them.

Cyprus authorities say a marine police patrol vessel has safely brought to port 33 migrants packed aboard a small boat that was sailing off the east Mediterranean island’s southeastern coast.

Police say the migrants included 17 men, six women, eight infants and two children, all but one of them Syrian. It’s unclear where the boat set sail but police said it must be from a neighboring Mideast nation.

The police vessel intercepted the migrants’ eight-meter (26-foot) boat based on information that it was heading toward Cyprus. The migrants were taken to Larnaca for medical checkups and processing.

The Spanish government says it is dispatching a naval ship to Italian waters to escort back a humanitarian group’s boat with 83 migrants on board in deteriorating conditions.

In a statement, the office of Spain’s caretaker center-left Socialist Prime Minister Pedro Sánchez, says the Audaz warship will end preparations and depart from the southern Spanish port of Rota on Tuesday afternoon.

The vessel’s arrival in Lampedusa is not expected until Friday, the statement says, adding that it will then sail to the main port in the island of Mallorca.

The announcement came as at least 15 migrants jumped into the sea from the Open Arms rescue ship in desperate bids to reach the shores of the Italian island in the central Mediterranean after 19 days on the boat.

Italy’s hard-line anti-migrant interior minister, Matteo Salvini, has refused port access to the ship, even though six other European countries have agreed to take in the migrants, who were rescued at sea in early August of the coast of Libya.

The humanitarian group Open Arms say another nine migrants have jumped into the sea “desperately trying to reach the coast of Lampedusa” — the Italian island only a few hundred yards away.

Open Arms said Tuesday that both the Italian coast guard and its own crew are trying to rescue them, adding “the situation is out of control.”

Live video shows people wearing orange life vests floating in the sea, some in groups some individually, with a coast guard vessel nearby and rubber dinghies trying to reach them.

The incident comes after another man threw himself into the sea earlier in the day. He was rescued by the Coast Guard but was refusing to return to the Open Arms ship. The standoff with Italy is in its 19th day, as Italy’s hard-line interior minister refuses to allow the Spanish ship access to a safe port even though other European nations have offered to take the migrants.

The Spanish humanitarian rescue ship Open Arms says another man had to be rescued after jumping into the sea as the standoff with Italy, which won’t permit it access to a port, entered its 19th day.

Open Arms described the situation on board Tuesday as “desperate,” saying that a man threw himself into the water, trying to reach land that is in plain view, while at the same moment a woman suffered a panic attack.

The Open Arms captain previously informed Italian authorities that the crew of 17 could no longer control the situation on board, as frustrated migrants resort to fighting.

Italy’s hard-line interior minister has refused port access to the ship, docked just off the island of Lampedusa, even though six other European countries have agreed to take the passengers. 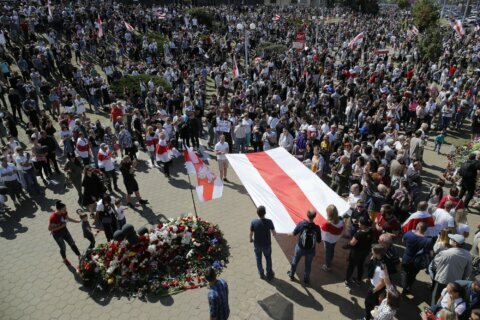 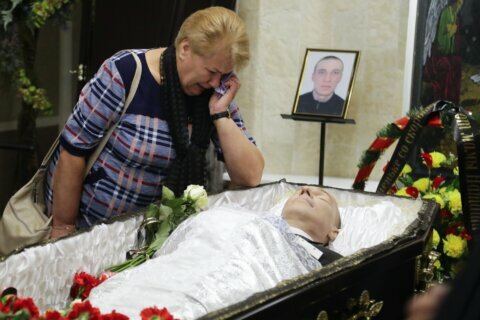