Invisible army set stage for liberation of Paris from Nazis

PARIS (AP) — The Nazis knew everything about the city of Paris that they occupied — almost. They didn’t know…
Listen now to WTOP News WTOP.com | Alexa | Google Home | WTOP App | 103.5 FM

PARIS (AP) — The Nazis knew everything about the city of Paris that they occupied — almost.

They didn’t know about the bunker with a massive door as thick as a bank vault that served as a command post for the chief of the Resistance in the French capital. They didn’t know all the secrets of an underground world defined by codes, assumed names and identities that covered the tracks of saboteurs and fighters.

On Sunday, Paris will celebrate 75 years since its liberation, when French and American tanks rolled into the former jewel of European cities that had epitomized the sweet life, but whose citizens were humiliated, hungry and mistrustful after 50 months under the Nazi boot. It was the Resistance movement that helped soften the city for the siege and the Nazis’ eventual surrender on Aug. 25, 1944.

A parade will retrace the entry into southern Paris, heading to the building that served as headquarters for Henri Tanguy — alias Col. Rol — chief of the French Forces of the Interior of the Paris region. A new museum on the site dedicated to the liberation will open, throwing wide the heavy door of Rol-Tanguy’s secret headquarters, 26 meters (85 feet) underground.

The dank complex of cement rooms was built in the 1930s to serve as a shelter to ensure city services in the event of bombings that ultimately didn’t occur. But on June 14, 1940, the Nazis moved into town, and hoisted their flag emblazoned with a swastika above the Eiffel Tower.

The Nazi hierarchy ensconced themselves in Paris’ luxury hotels, and hobnobbed at theaters and fine restaurants. Photos at the museum show artists and industrialists at soirees hosted by the occupiers, who quickly redefined life in the City of Light.

Most Parisians got on with diminished lives, using age-based ration tickets to eat, wooden soles on shoes to replace scarce leather and sometimes curtains for clothes. Some women painted their legs to look like silk stockings. The black market thrived.

Some, though, revolted, entering the clandestine world of the Resistance, the “army of the shadows.”

It is impossible to know how many Parisians went underground, said Sylvie Zaidman, director of the Museum of the Liberation of Paris.

“It’s a hidden story,” she said. “If you’re Resistance, you leave as few traces as possible. So there are pseudonyms … there are double lives that are completely separate.”

She pointed to Jean Moulin, the Resistance hero who unified multiple networks, political parties and unions into a council that met in occupied Paris in May 1943. The former state administrator with a love of art opted for a cloak-and-dagger role, posing as an art gallerist in Nice while unifying the southern Resistance. Arrested during a secret meeting, he was tortured and put on a train to Berlin but apparently died en route, July 8, 1943.

The museum bears Moulin’s name along with that of another top figure, Gen. Leclerc, the nom de guerre of Philippe de Hauteclocque, who marched into Paris ahead of Allied troops to liberate the city.

More invisible were the ordinary citizens who risked their lives to pass pamphlets or messages, or to kill and be killed.

A network started at Paris’ Musee de l’Homme shortly after the beginning of the Occupation was among the first, only to be decimated the following year via a double-agent reporting to German intelligence. Seven members were shot to death following a trial.

Madeleine Riffaud — alias Rainer — who turns 95 on Friday, learned her sharpshooting skills from hunting with her father. She used them to kill a Nazi soldier on July 23, 1944, a Sunday afternoon on the Solferino bridge.

Riffaud was spotted as she escaped on her bicycle, then arrested, tortured and imprisoned before being freed in a prisoner exchange days before the liberation of the city.

“To carry out an action like that isn’t playing with dolls,” she said. But with Paris rising from its torpor following the Normandy D-Day landings in June — changing the tide of war — the message went out that acts “to encourage the population” were needed.

“We had a party” when the Americans entered the war, she said.

On Aug. 19, 1944, police officers rebelled and took over police headquarters. Police had, notably, been complicit in the most dastardly act of the Occupation, the 1942 roundup of some 13,000 Jews at the Vel d’Hiv bicycle stadium, all deported to the Auschwitz death camp in Nazi-occupied Poland, so the revolt underscored the shift in the balance of power as resistance spread.

From his underground bunker, Rol-Tanguy called for an insurrection. Barricades went up around Paris. On the night of Aug. 24, the first Allied troops entered southern Paris. The grand entrance of Gen. Leclerc’s 2nd Armored Division followed by Allied forces would come the following day.

The military governor of Paris, Gen. Dietrich von Choltitz, arrested at his headquarters at the Meurice Hotel, signed the surrender in the presence of Rol-Tanguy.

The liberation of Paris was both joyous and chaotic, with competing forces even within the Resistance.

Riffaud was at the Place de la Republique in eastern Paris, near barracks where Nazis were making a last stand. A friend was killed before her eyes.

“People were dancing with joy. Me, with two comrades … we cried like kids,” she recounted. We didn’t party at all.”

Paris suffered no major damage, though buildings still bear the bullet holes of fighting. According to the Liberation museum, 1,000 French Forces of the Interior and 582 civilians were killed, along with 156 troops of Leclerc’s division. Among the Germans, 3,200 were killed and 12,800 were taken prisoner. 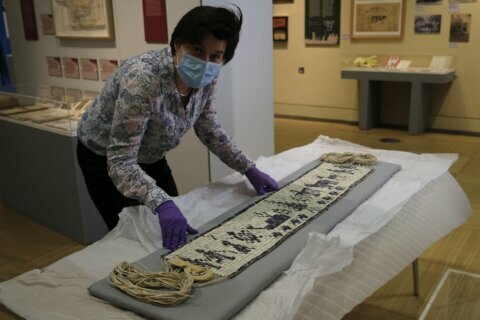 After 400 years, Native stories at heart of Mayflower events