A pair of tombs in a tiny cemetery in Vatican City will be opened next week to determine if they contained the remains of a 15-year-old girl who vanished in Rome in 1983.
(1/4) VATICAN CITY (AP) — In a new twist to one of Italy’s most persistent mysteries, a pair of tombs in a tiny cemetery in Vatican City will be opened next week to determine if they contained the remains of a 15-year-old girl who vanished in Rome in 1983.

Relatives of Emanuela Orlandi, the daughter of a Vatican employee who never returned after heading out to a music lesson in Rome, have long demanded that the Vatican look into her disappearance and reveal all official documentation about the case.

The cold case gained fresh attention in recent months following an anonymous tip about where Orlandi might be buried. Vatican spokesman Alessandro Gisotti said Tuesday that Orlandi’s family “signaled the possible burial of her body in the tiny cemetery located inside Vatican State territory,” prompting the Holy See to open an investigation and ultimately leading to the decision to open the graves.

Gisotti said Orlandi’s relatives and lawyers for the family and the Holy See will be present when the two graves are opened on July 11 in the Teutonic Cemetery in the Vatican. Relatives of the people buried in the two tombs would also attend, Gisotti said, without identifying those families.

The tipster had indicated that investigators should look where a statue of an angel in the cemetery is pointing. The angel holds a sheet bearing the words “Rest in peace.”

The exhumed remains will be scientifically analyzed to date them, and DNA testing will be carried out to see if any of the remains might be Orlandi’s.

Orlandi’s brother, Pietro, told the Italian news agency ANSA that the Vatican secretary of state, Cardinal Pietro Parolin, showed “much courage by opening this investigation and deciding to open the tombs.”

Speculation has swirled around Orlandi’s fate almost since her disappearance. Over the years many rumors have swirled about what happened to her — including conspiracies tied to the Mafia and the plot to assassinate Pope John Paul II.

Last year, two sets of remains were found in the basement of a building of the Vatican’s embassy in Rome. That discovery sparked speculation some of the remains might be Orlandi’s, but scientific testing ruled that out. 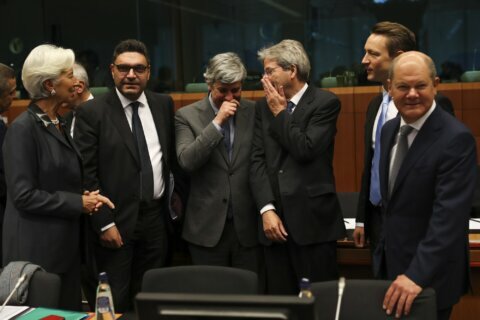