VILNIUS, Lithuania (AP) — The two contestants in Lithuania’s runoff election for a new president have one thing in common: They want to maintain the strict tone toward neighboring Russia, while easing sometimes harsh rhetoric.

Gitanas Nauseda, a prominent economist, and Ingrida Simonyte, a former finance minister, are vying to succeed the popular Dalia Grybauskaite, who has called Russia “a terrorist state.”

“Too harsh rhetoric is not a solution. We can’t shut all the windows with the neighbor in diplomatic, cultural and economic relations,” Nauseda, 55, told The Associated Press ahead of Sunday’s runoff ballot, held the same day as the European Parliament elections.

The business-oriented Nauseda is not supported by any political party but calls himself “a man of center-right.”

“I do not see any reasons to change course in relation to Russia because nothing has changed there,” said the 44-year-old Simonyte, who was finance minister from 2008-2012 when Lithuania suffered from severe economic hardship and harsh austerity measures.

“But I think what we have to do in a broader sense is to prepare to talk with the Russia of the future,” she added. Simonyte also isn’t a member of any political party but is supported by the right-leaning opposition.

Both candidates have taken a “pragmatic approach” to relations with Russia with less confrontation — but they also have stressed that they won’t go to Moscow and meet President Vladimir Putin unless his country withdraws from Crimea, which it annexed from Ukraine in 2014, said Jurate Novagrockiene, a political scientist with the General Jonas Zemaitis Military Academy in the capital Vilnius.

The annexation sparked fears that other former Soviet republics could be next.

This presidential campaign, however, has been dominated by voters’ anger over economic inequality and corruption.

The income inequality in Lithuania, a Baltic country of 3 million, is among the highest in the European Union, which it joined in 2004.

That same year Lithuania became also a member of NATO together with its Baltic neighbors Estonia and Latvia.

The presidential hopefuls have vowed that tax income should be raised to fund more state spending.

Novagrockiene expects a close race on Sunday with an edge to Nauseda, who has said he wants to increase revenues and better fund social services such as pensions.

Grybauskaite, president since 2009, has been a strong critic of Putin and campaigned on stopping corruption and improving Lithuania’s economy. She must step down after her two five-year terms.

Casting her ballot in early voting on Tuesday, Grybauskaite wished “strength” for the winner who will take office in July. 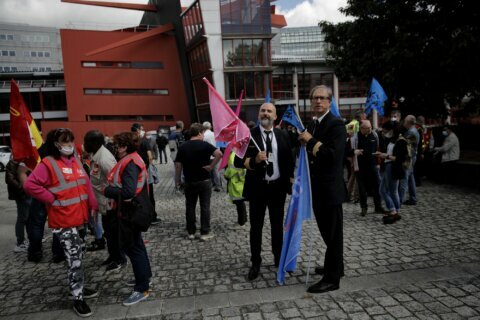