WARSAW, Poland (AP) — Residents in Poland’s northern city of Gdansk voted Sunday in a by-election to choose the successor to late Mayor Pawel Adamowicz, who was fatally stabbed during a charity event.

The slaying of the liberal longtime mayor became a platform for calls for political reconciliation but also criticism of Poland’s conservative ruling party. Adamowicz was a critic of the Law and Justice party.

His funeral drew tens of thousands of people, largely supporters of opposition parties.

Adamowicz, 53, was serving his sixth term as Gdansk mayor when a man stabbed him on the stage of the Jan. 13 charity event.

The assailant grabbed a microphone and told the stunned audience he acted to take revenge for being imprisoned when the now-opposition Civic Platform party governed Poland. Adamowicz was a former member.

The attacker was arrested s under arrest and undergoing psychiatric evaluation.

Among the three candidates in Sunday’s vote is Aleksandra Dulkiewicz, a 39-year-old lawyer who was Adamowicz’s deputy and is now acting mayor. The ruling party did not field a candidate in the mayoral election.

After casting her ballot, Dulkiewicz said she hoped for a high turnout. If elected, she would be the first woman to serve as Gdansk’s mayor.

The other candidates are documentary filmmaker Grzegorz Barun and businessman Marek Skiba.

Some 340,000 voters were eligible to cast ballots. Official returns are expected Monday. 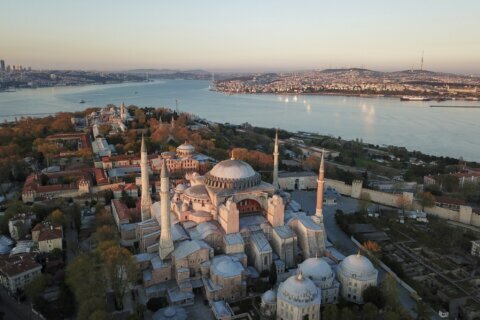