A gentle and mournful spell is cast by Joanna Hogg’s “The Eternal Daughter,” a ghost story where memory is manifested – visited, intruded upon and, finally, made to glow.

The film begins, enchantingly, with fog drifting through barren tree branches and a white taxi winding through a country road. The gothic mood is immediately cozily familiar. “The Eternal Daughter,” set entirely in a creaky country manor, is very consciously working in a genre tradition, but from a very personal angle.

“The Eternal Daughter,” which A24 released in theaters and on demand Friday, is a kind of coda to Hogg’s last two films. The British filmmaker last made the two-part “The Souvenir,” which painstakingly resurrected her own memories from her days as a film student and culminated, beautifully, with her confident self-realization as a director.

In “The Souvenir,” Honor Swinton Byrne played Hogg’s fictional stand-in, Julie, a young filmmaker, with Tilda Swinton (Byrne’s real-life mother) playing her mother. In “The Eternal Daughter,” Julie is now a middle-aged, accomplished filmmaker and is played by Swinton. She is taking her mother, Rosaline (also played by Swinton) on a vacation to a Welsh inn that Rosaline sheltered in during World War II. In this extended cinematic universe — the Hoggverse? — even one of the dogs from “The Souvenir,” a Springer Spaniel named Louis and Swinton’s real-life pet, reprises his role.

But the many doublings and real-world mirrors that reflect through “The Eternal Daughter” are part of its enigmatic mystery. Not only is there something vaguely spectral about Rosaline, whose interactions are limited to conversations with her daughter, but the old inn they are staying in is curiously empty and rather inhospitable. When they arrive, the curt front-desk manager (Carly-Sophia Davies) can’t find their reservation and, despite a wall full of keys behind her, only reluctantly grants them a room on the second floor.

In this empty manor, Julie is trying to spend some time with her mother and get some writing done. It’s not going as poorly as it did for Jack Torrance of “The Shining,” in another labyrinthine remote. But the going is slow, her sleep is disturbed by banging shutters and some of the reflections the trip prompts in Rosaline aren’t as warm as Julie expected. It was here, she says, she learned her brother died in the war. Julie, embarrassed that their trip has dredged up her mother’s pain, profusely apologizes.

Their goings-about are limited mostly to tea in bed, reading and a nightly dinner. But there are echoes everywhere of something hard to grasp. The unspoken is as thick as the fog. Rosaline carries with her a bag of “things to go through,” a hint of some unfinished work. Occasionally, the unsettled tension breaks. After no sight of any hotel worker beside the front-desk manager, Julie encounters a kindly man at night (played sweetly by Joseph Mydell) who’s more welcoming. He shares memories of his late wife, who used to work there, too. The past, initially reluctant to come forth, grows more present.

“That’s what rooms do,” Rosaline says. “They hold these stories.”

That, too, was part of the belief in “The Souvenir,” which recreated Hogg’s old apartment in great detail. Like those films, “The Eternal Daughter” is reflexive in its construction — a memory piece about remembering. It’s also a chance to marvel, again, at Swinton’s capacity for inhabiting one, or more, roles. So much does she occupy each character that you have to remind yourself that’s she playing both. If anything, I wished their dialogue together plunged deeper than it does — that the movie was also about her memories, not just the recalling of them. Still, the yawning gulf between mother and daughter, past and present, is part of the movie’s seductive nocturnal chill. It’s a fog lifted, finally, by the warming conviction that trying to bridge the gap is worth the struggle.

“The Eternal Daughter,” an A24 release, is rated PG-13 by the Motion Picture Association for some drug material. Running time: 96 minutes. Three stars out of four. 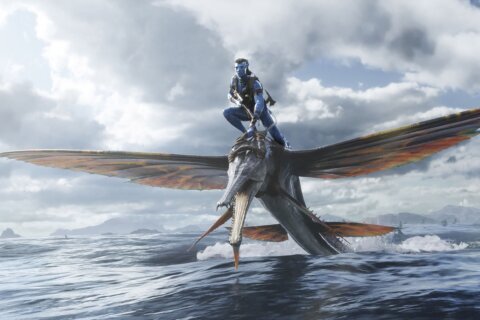