Once a superhero franchise goes multiverse, it’s hard to go back.

No work of fiction ever needs permission to break the rules or push the boundaries of traditional storytelling, but the multiverse, at least as it’s been served up in recent Marvel movies, practically demands it. And for the moment that means a lot of cameo opportunities. “ Spider-Man: No Way Home ” opened the door to the concept, to mostly charming results, but now Benedict Cumberbatch’s master of the mystic arts is flying through the interdimensional portal with the concept in “ Doctor Strange in the Multiverse of Madness.”

This film is technically the sequel to “Doctor Strange,” a movie that came out six years ago. But so much has happened in Marvel land that involves Stephen Strange and his goatee — “Infinity War,” “Endgame” and, yes, the most recent “Spider-Man” — that where it falls in the “Doctor Strange” standalone film continuity is entirely beside the point. One could not simply watch “Doctor Strange” and then “Doctor Strange 2” and expect it to make sense.

Not only that, understanding, or at least being invested in “Doctor Strange 2,” also requires some passing knowledge of “WandaVision,” the nine-episode Disney+ series that runs almost six hours total. This is not a surprise or a burden to Marvel fans, but it does seem like quite a lot to ask of the average moviegoer (though perhaps at this point they’re one and the same).

So it’s especially interesting that Sam Raimi agreed to jump into this messy corporate multiverse at this point. His “Spider-Man” movies are still among the top of the crop of modern superhero franchises, after all. Raimi was able to put his own stamp on this endeavor, including but not limited to a Bruce Campbell cameo. There are horror elements, too, some so intense that families might think twice before bringing everyone to the multiplex, some interesting visuals not entirely dissimilar to the city-bending of “Inception” and some humor. But Raimi doesn’t take “Doctor Strange” to an entirely new tonal place, like, say Taika Waititi did with Thor. He mostly sticks to the framework established by Scott Derrickson.

The main issue is that it’s a bit of a kitchen sink movie centered on an entirely new and underdeveloped character, America Chavez (Xochitl Gomez), a teen who has the power to travel the multiverse but doesn’t quite know how to control it. She’s being hunted by someone who wants her powers and Strange decides to help, possibly out of genuine altruism and possibly because it was a good excuse to literally jump off a balcony to get out of his old flame Christine’s (Rachel McAdams) wedding early.

Unfortunately, he asks the wrong Avenger for help: Elizbeth Olsen’s Wanda Maximoff is the one after the power to go multiverse jumping and has been dabbling in some dark arts to make it happen. She’s motivated by the idea that she has children out there in an idyllic suburban multiverse in which she wears yoga pants and loose cotton tops and tucks her boys in at night after ice cream and movies. Soon she and Strange are having a standoff in midair.

The script is inventive in the way it plays around with a jumble of big sci-fi concepts, which makes sense considering screenwriter Michael Waldron is a veteran of “Rick & Morty.” But it also underwhelms when it comes to the mishmash structure and the women. Olsen still sells Wanda’s pain like the best of them, even though she’s been reduced to a stereotype of female hysteria. Christine is merely there to make Strange realize things about himself. And America, well, she never really earns our emotional investment.

After “Infinity War” and “Endgame,” “Doctor Strange in the Multiverse of Madness” feels a little bit like wheel spinning. Cumberbatch has fun with his character, but his limitless ego seems to have been a little muted here as he grapples with his own happiness. And that invites more questions, like do we ultimately care about whether or not Doctor Strange is happy? Does he? Could everyone just use some post blip therapy instead of these interdimensional bottle episodes?

Perhaps the Marvel universe is finally starting to feel like a long running comic book series. Or maybe Phase 4 just hasn’t kicked into gear just yet.

“Doctor Strange in the Multiverse of Madness,” a Disney release in theaters Thursday, is rated PG-13 by the Motion Picture Association of America for, “intense sequences of violence and action, frightening images and some language.” Running time: 126 minutes. Two stars out of four.

Burn-proof edition of ‘The Handmaid’s Tale’ up for auction 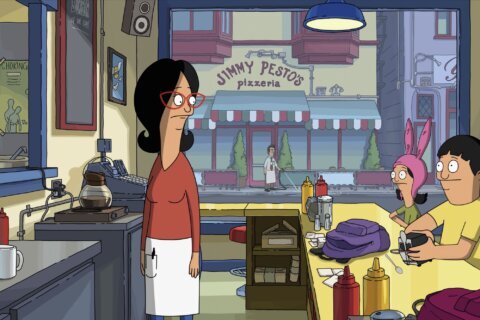