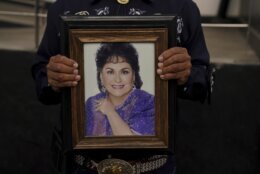 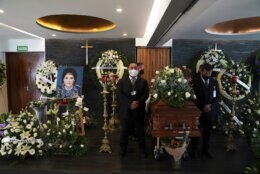 MEXICO CITY (AP) — Mexican actor Carmen Salinas, known for movies like “Danzón,” “Man on Fire” and “Bellas de Noche” and telenovelas and series including “María la del Barrio” and “Mujeres Asesinas,” has died. She was 82.

“With great sorrow, we inform you that leading actress Carmen Salinas passed away today,” says the message along with a black and white photograph of the artist, thanking her fans for their support.

Salinas had been in a coma after suffering a stroke in November. Details about her funeral services would be released later, her family said.

Jocular but always affable, Salinas could go from comedy to drama with ease.

Born to a humble single mother in Torreón, Coahuila, on October 5, 1939, she only went to elementary school and started her acting career as a child, in the 50’s, following into her sister Finita’s footsteps.

Salinas sang and did impersonations on the radio, and when she was a little older she participated in beauty and talent contests. Soon she began to perform in Coahuila and Mexico City venues including the famous El Patio nightclub, where she said she liked to party with actress Evita Muñoz “Chachita” and actor Pedro Infante.

She was a member of Mexico’s Institutional Revolutionary Party, for which she was elected plurinominal federal deputy in 2015, a position she held until 2018. She came to be criticized for falling asleep in a session of the radio and television commission, and she told the press that she preferred the money she earned as an actor than as a legislator.

In 1956 she married the pianist Pedro Plascencia, with whom she had two children — María Eugenia and Pedro — before parting ways in the 1960s. Her son Pedro, who was also a musician, died of cancer in 1994 and Salinas spoke openly about the pain this caused her.

She is survived by her daughter María Eugenia and her grandchildren.