An assistant director unwittingly handed Alec Baldwin a loaded weapon and told him it was safe to use in the moments before the actor fatally shot a cinematographer, court records released Friday show.
Listen now to WTOP News WTOP.com | Alexa | Google Home | WTOP App | 103.5 FM
(1/23) 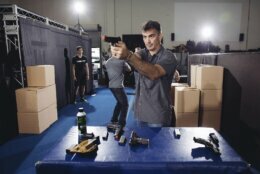 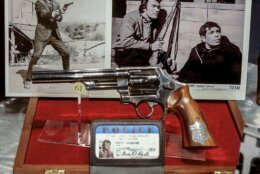 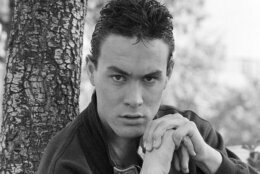 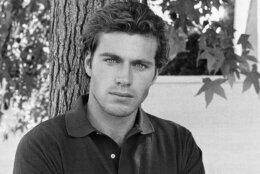 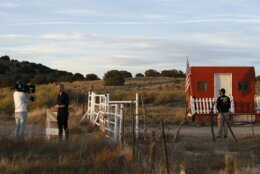 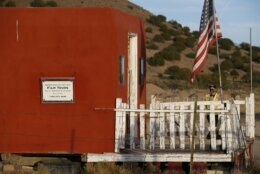 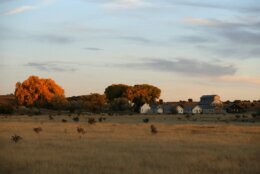 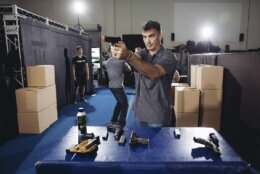 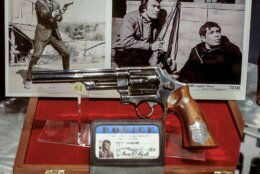 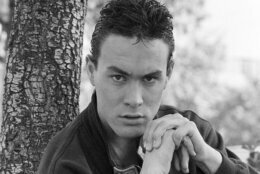 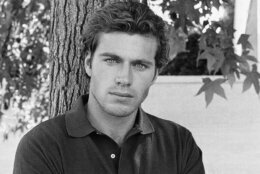 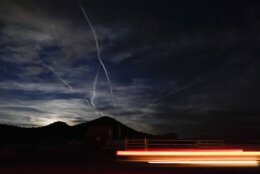 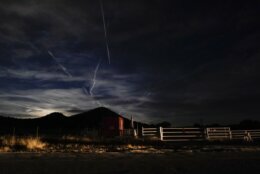 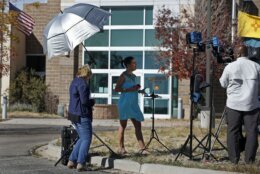 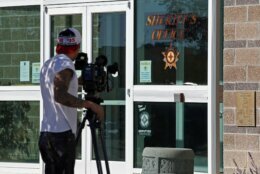 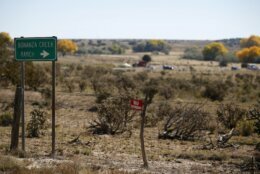 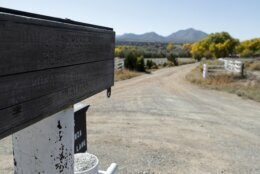 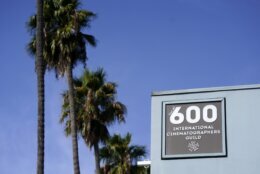 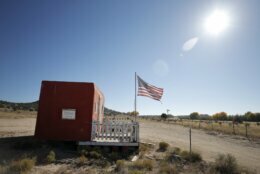 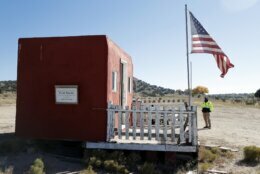 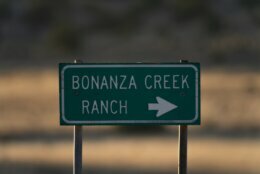 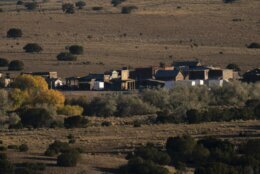 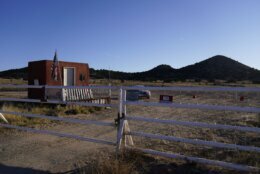 SANTA FE, N.M. (AP) — Hours before actor Alec Baldwin fired a fatal gunshot from a prop gun that he had been told was safe, a camera crew for the movie he was filming walked off the job to protest conditions and production issues that included safety concerns.

Disputes in the production of the Western film “Rust” began almost from the start in early October and culminated with seven crew members walking off several hours before 42-year-old cinematographer Halyna Hutchins was killed.

The crew members had expressed their discontent with matters that ranged from safety procedures to their housing accommodations, according to one of those who left. He requested anonymity for fear that speaking up would hurt his prospects for future jobs. Rust Movie Productions did not answer emails Friday and Saturday seeking comment.

At a rehearsal on the film set Thursday at Bonanza Creek Ranch outside Santa Fe, the gun Baldwin used was one of three that a firearms specialist, or “armorer,” had set on a cart outside the building where a scene was being rehearsed, according to the court records.

Court records indicate that an assistant director, Dave Halls, grabbed a prop gun off a cart and handed it to Baldwin, indicating incorrectly that the weapon didn’t carry live rounds by yelling “cold gun.”

When Baldwin pulled the trigger, he unwittingly killed Hutchins and wounded director Joel Souza, who was standing behind her inside a wooden, chapel-like building.

Baldwin, 63, who is known for his roles in “30 Rock” and “The Hunt for Red October” and his impression of former President Donald Trump on “Saturday Night Live,” has described the killing as a “tragic accident.” He was a producer of “Rust.”

A 911 call that alerted authorities to the shooting at the Bonanza Creek Ranch outside Santa Fe hints at the panic on the movie set, as detailed in a recording released by the Santa Fe County Regional Emergency Communications Center.

“We had two people accidentally shot on a movie set by a prop gun, we need help immediately,” script supervisor Mamie Mitchell told an emergency dispatcher. “We were rehearsing and it went off, and I ran out, we all ran out.”

The dispatcher asked if the gun was loaded with a real bullet.

“I cannot tell you. We have two injuries,” Mitchell replied. “And this (expletive) AD (assistant director) that yelled at me at lunch, asking about revisions….He’s supposed to check the guns. He’s responsible for what happens on the set.”

The Associated Press was unable to contact Hannah Gutierrez, the film’s armorer, and several messages sent to production companies affiliated with “Rust” did not receive responses Friday.

Court records say that Halls grabbed the firearm from the cart and brought it inside to the actor, also unaware that it was loaded with live rounds, a detective wrote in a search warrant application.

It was unclear how many rounds were fired. Gutierrez removed a shell casing from the gun after the shooting, and she turned the weapon over to police when they arrived, the court records say.

Guns used in making movies are sometimes real weapons that can fire either bullets or blanks, which are gunpowder charges intended to produce little more than a flash and a bang.

New Mexico workplace safety investigators are examining if film industry standards for gun safety were followed during production of “Rust.” The Los Angeles Times, citing two crew members it did not name, reported that five days before the shooting, Baldwin’s stunt double accidentally fired two live rounds after being told the gun didn’t have any ammunition.

A crew member who was alarmed by the misfires told a unit production manager in a text message, “We’ve now had 3 accidental discharges. This is super unsafe,” according to a copy of the message reviewed by the newspaper. The New York Times also reported that there were at least two earlier accidental gun discharges; it cited three former crew members.

Mitchell, the script supervisor, told The Associated Press she was standing next to Hutchins when the cinematographer was hit.

“I ran out and called 911 and said ‘Bring everybody, send everybody,’” Mitchell said. “This woman is gone at the beginning of her career. She was an extraordinary, rare, very rare woman.”

Filmmaker Souza, who was shot in the shoulder, said in a statement to NBC News that he was grateful for the support he was receiving and gutted by the loss of Hutchins. “She was kind, vibrant, incredibly talented, fought for every inch and always pushed me to be better,” he said.

Santa Fe-area District Attorney Mary Carmack-Altwies said prosecutors will be reviewing evidence in the shooting and do not know if charges will be filed.

Hutchins’ husband Matthew Hutchins posted on social media to mourn his wife’s loss, ask for privacy for his family, and thank her friends and mentors at the American Film Institute, who he said “nurtured the success we had only just begun to see flourish.”

At a vigil Saturday around 200 film crew workers gathered for a candlelight vigil as the sun set. They shared grief at the loss of one of their own, and fear of accidents on their own film sets.

Several in attendance lit candles, held a moment of silence, read poetry and made brief comments including one testimonial to her artistic spark and generosity.

Production on “Rust” was halted after the shooting. The movie is about a 13-year-old boy who is left to fend for himself and his younger brother following the death of their parents in 1880s Kansas, according to the Internet Movie Database website.

The crew member that spoke to the AP said he never witnessed any formal orientation about weapons used on set, which normally would take place before filming begins.

He also said only minimal COVID-19 precautions were taken even though crew and cast members often worked in small enclosed spaces on the ranch.

The crew was initially housed at the Courtyard by Marriot in Santa Fe, according to the crew member. Four days in, however, they were told that going forward they would be housed at the budget Coyote South hotel. Some crew members balked at staying there.

“We packed our gear and left that morning,” the crew member said of the Thursday walkout.

The Los Angeles Times and Variety also reported on the walkout.

Gutierrez, the film’s armorer, is the daughter of a longtime Hollywood firearms expert. She gave an interview in September to the Voices of the West podcast in which she said she had learned how to handle guns from her father since she was a teenager.

During the podcast interview, Gutierrez shared that she just finished her first movie in the role of head armorer, a project in Montana starring Nicolas Cage titled “The Old Way.”

“I was really nervous about it at first and I almost didn’t take the job because I wasn’t sure if I was ready but doing it, like, it went really smoothly,” she said.

In another on-set gun death from 1993, Brandon Lee, the son of martial arts legend Bruce Lee, was killed by a bullet left in a prop gun after a previous scene. Similar shootings have occurred involving stage weapons that were loaded with live rounds during historical re-enactments.

Gun-safety protocol on sets in the United States has improved since then, said Steven Hall, a veteran director of photography in Britain. But he said one of the riskiest positions to be in is behind the camera because that person is in the line of fire in scenes where an actor appears to point a gun at the audience.