— Jake Gyllenhaal teams up with director Antoine Fuqua and screenwriter Nic Pizzolatto (“True Detective”) for the tense thriller “The Guilty,” which is set entirely inside a 911 call center in Los Angeles. Hitting Netflix on Friday, Gyllenhaal plays a disgraced cop relegated to fielding emergency phone calls on the overnight shift. Although a perfect conceit for a pandemic production, the claustrophobic environs actually preceded COVID-19 protocols — that came from the 2018 Danish film that they’re remaking. The always compelling Gyllenhaal carries the film even though his scene partners are mostly computer screens, telephones and disembodied voices.

— Nearly a quarter century after “The Sopranos” wrapped its six season run on HBO, David Chase has brought his best known character back in “The Many Saints of Newark.” The film, which debuts in theaters and on HBO Max on Friday, follows a young Tony Soprano (played by the late James Gandolfini’s son Michael Gandolfini) in 1960s Newark, New Jersey, amid the race riots and violent corruption in the city. Jon Bernthal plays his father and Alessandro Nivola plays a charismatic mobster who takes an interest in Tony.

— Filmmaker Erin Lee Carr couldn’t have known that Britney Spears would once again be in the daily news cycle when she started on her secretive Netflix documentary “Britney vs Spears,” available starting Tuesday, but the timing could not be better for another in-depth look at the life of the pop star. Carr has said that the film is different from “Framing Britney Spears,” the New York Times-produced documentary that came out earlier this year and prompted widespread reconsideration of how Spears was treated in the media at the height of her fame. Carr’s investigates the conservatorship. She told the Los Angeles Times that she wants her film, “to be the definitive place to understand the beginning, middle and hopefully what we will find out as the end of this saga.”

— Six-time Grammy-winner Brandi Carlile has been busy during the pandemic, releasing a memoir and now a highly anticipated new album, “In These Silent Days,” on Friday. Carlile said she was inspired by David Bowie, Freddie Mercury and her two close musical friends, Elton John and Joni Mitchell, on the new record. It’s a follow-up to her acclaimed, breakout record “By The Way, I Forgive You” released in 2018. Recorded during quarantine in Nashville, Tennessee, she teamed up again with producers Shooter Jennings and Dave Cobb, as well as her longtime bandmates Tim and Phil Hanseroth.

— The Doobie Brothers are celebrating their 50th anniversary in their 51st year with a postponed tour and a new album. “Liberté” is out Friday, featuring founding members Tom Johnston and Patrick Simmons, along with guitarist John McFee. The tour kicked off in August with former member Michael McDonald after being delayed a year because of the pandemic. It’s the first album of new original songs since 2010 for the newly inducted Rock & Roll Hall of Famers.

— One duets album wasn’t enough for pop diva Lady Gaga and icon Tony Bennett. The pair are releasing their second collaborative album “Love For Sale,” on Friday, which focuses on the two singers taking on Cole Porter classics, such as “I Get A Kick Out of You.” Their previous album together, “Cheek to Cheek” debuted at No. 1 on the Billboard Album charts in 2014 and earned them a Grammy for “Best Traditional Pop Vocal.” Bennett, who turned 95 this year, was diagnosed with Alzheimer’s disease and canceled his scheduled tour dates this year. But fans of the two New York singers can still see them perform together in a livestream on Sept. 30.

— Jon Stewart is back, and Apple TV+ has him. “The Problem With Jon Stewart” debuts Thursday, with episodes released on an every-other-week basis. Details are scant, but it’s been described as an exploration of issues of national interest as well as Stewart’s advocacy work. He’s an outspoken supporter of military veterans and 9/11 first responders, and he and his wife, Tracey, are animal rights proponents. There’s a suggestion that humor is involved: in a promotional trailer, Stewart shrieks when he looks in the mirror, then mutters, “Why would I go back to a visual medium? I could have done a podcast.” Unsurprisingly, there is a companion podcast.

— Here’s a contest with a difference: “The Earthshot Prize: Repairing Our Planet,” a five-part Discovery series, will highlight 15 finalists and their solutions to a quintet of the planet’s greatest environmental problems, including air and ocean quality. Debuting Sunday on the discovery+ streaming service, the series features David Attenborough and Britain’s Prince William, who in 2020 launched the competition whose name evokes President John F. Kennedy’s “moonshot” program. The full series will air on the Discovery Channel on Oct. 16 (4 p.m. EDT), with the award ceremony carried Oct. 17 on Discovery’s Facebook page.

— The place: Los Angeles. The disaster: A giant sinkhole opens mid-city, plunging hundreds of people and buildings into its depths. That’s the start of NBC’s “La Brea,” in which “down under” refers not to Australia but a primeval world that tests its reluctant new inhabitants’ survival skills. Meanwhile, folks who are above-ground, still coping with traffic and smog, search for answers and a rescue plan. The cast includes Natalie Zea, Eoin Macken, Jon Seda, Nicholas Gonzalez and Chiké Okonkwo. The series premieres 9 p.m. EDT Tuesday on the network, and will be available Wednesday on the Peacock streaming service. 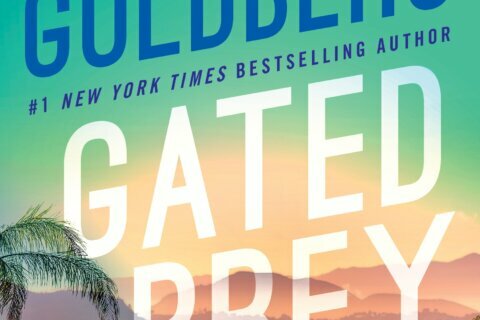