An audio recording of Tom Cruise yelling at crew members on the set of the latest “Mission: Impossible” movie in London has gone viral. The actor, who is also producing the film, can be heard using expletives toward the crew for not following COVID-19 safety protocols.

Sources close to the production told Reuters and Variety that the audio, which first obtained by The Sun, is authentic.

On the recording, which has been widely shared on social media, Cruise addresses two people he apparently saw standing too close to each other, in violation of social distancing rules.

“If I see you do it again you’re f***ing gone,” Cruise says. The expletive-filled recording goes on for three and a half minutes. 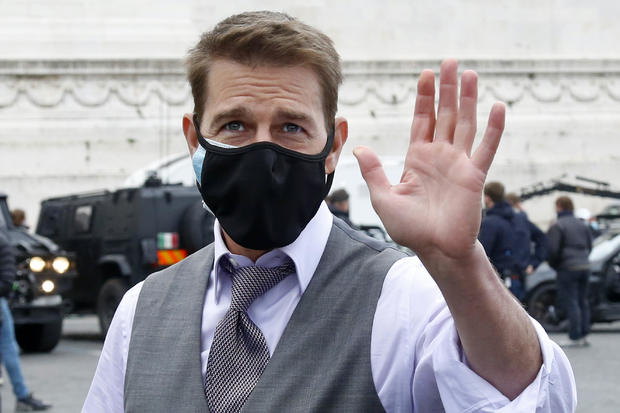 Actor Tom Cruise during a pause in filming on the set of “Mission: Impossible 7” in Rome, Italy, on November 29, 2020.

“We are the gold standard,” he says. “They’re back there in Hollywood making movies right now because of us. Because they believe in us and what we’re doing. I’m on the phone with every f***ing studio at night, insurance companies, producers, and they’re looking at us and using us to make their movies. We are creating thousands of jobs, you motherf***ers. I don’t ever want to see it again. Ever!”

Many industries have been effected by COVID-19, and while film production is now being allowed with safety restrictions in place in many cities, it was initially put on hold at the start of the pandemic.

“No apologies,” Cruise says to the crew members. “You can tell it to the people who are losing their f***ing homes because our industry is shut down. It’s not going to put food on their table or pay for their college education. That’s what I sleep with every night — the future of this f***ing industry!”

He continues, “I have told you, and now I want it, and if you don’t do it, you’re out. We are not shutting this f***ing movie down! Is it understood? If I see it again, you’re f***ing gone.”

After a couple of minutes, Cruise’s anger gives way to a more pleading tone. He reiterates that the crew members have a responsibility and that not following protocols would lead to the film being shut down, costing people their jobs.

It is unclear what day the audio was recorded. On Wednesday, London moved into “Tier 3: Very High Alert” meaning tighter restrictions are in place, closing down bars, pubs and restaurants except for takeout, shuttering theaters and banning indoor social gatherings.

The Tier 3 guidance still allows film and TV shoots to continue, according to Film London. However, there is a checklist of protocols that productions must follow, including social distancing, increased cleaning of equipment and keeping the number of people present to a minimum.

According to Reuters, production on the seventh “Mission: Impossible” was shut down in February while filming in Italy. Filming resumed in September and moved into London in December. The movie, from Paramount Pictures (a division of ViacomCBS), is scheduled to premiere in November 2021.

CBS News has reached out to Paramount Pictures for comment and is awaiting response.