NEW YORK (AP) — Bernard Bailyn, a Pulitzer Prize-winning historian and educator of lasting influence whose “The Ideological Origins of the American Revolution” transformed how many thought about the country’s formation, has died at 97.

Bailyn’s wife, Lotte, told The Associated Press that the author died early Friday at their home in Belmont, Massachusetts. He had been in failing health, she said.

Bernard Bailyn had an enduring and prolific career even though he was never as widely known as Gordon Wood and other historians of the early U.S. A longtime professor at Harvard who mentored numerous young historians, Bailyn probed everything from education to immigration in early American life and was widely credited with setting more rigorous standards of research. He documented the effects of British and European culture on Americans, the role of pamphlets in revolutionary thinking and the rise of merchant and planter classes.

His most prominent legacy was in forming a new narrative of the revolution itself. Along with Yale University historian Edmund S. Morgan and other contemporaries, he challenged the theory of Charles A. Beard that the founders were wealthy opportunists less interested in ideas than in power, using revolutionary rhetoric to arrange a society that primarily benefited themselves. Through a close reading of political pamphlets, Bailyn believed that the founders held sincere and reasoned ideas about democracy and profoundly objected to British claims of ultimate power to enact laws for the colonies.

He also downplayed the influence of Enlightenment philosophy, writing that the founders drew upon theories of liberty and government well developed by British opponents of monarchy.

This “logic of rebellion” led the founders not only to defy their colonial rulers, but to envision “America’s destiny in the context of world history,” Bailyn wrote.

An acknowledged landmark in scholarship, “The Ideological Origins of the American Revolution” won the Pulitzer Prize and Bancroft Prize in 1968. Morgan, who died in 2013, once praised “Ideological Origins” as the “book that has done the most to shape modern understanding of the causes of the Revolution.”

Bailyn received another Pulitzer, in 1987, for “Voyagers to the West,” a breakthrough study that was among the first scholarly analyses of colonial era immigration from England to the New World, a subject of enduring interest to Bailyn. His other books included “The Origins of American Politics” and “To Begin the World Anew,” which included a widely discussed essay about the Federalist papers. Bailyn noted that the papers, written in haste in the 18th century to raise support for the new constitution, only recently became canonical documents. They were mostly ignored by the Supreme Court until the middle of the 20th century, when both liberal and conservative justices began citing them to back up opinions on everything from banking to alcohol.

“The authors of the Federalist papers lived in a pre-industrial world whose social and economic problems were utterly different from ours and whose social policies, insofar that they had any, if implemented now would cause chaos,” Bailyn wrote.

In 2010, Bailyn was awarded a National Humanities Medal “for illuminating the nation’s early history and pioneering the field of Atlantic history.” In his 90s, he completed a trilogy on the colonial population with “The Barbarous Years.”

Bailyn married Lotte Lazarsfeld, later a professor at MIT, in 1952. They had two sons, Charles and John, both of whom became professors.

Literature was Bailyn’s first love. Born in Hartford, Connecticut, he was a self-described reading addict as a child who immersed himself in everyone from James Fenimore Cooper to Rudyard Kipling. He also became fascinated by a book on old English towns and wondered why they differed from their namesakes in New England.

He studied English as an undergraduate at Williams College, and had planned a thesis on the 18th-century novelist Laurence Sterne, but preferred the history of that time to the fiction. Before he could finish his studies, World War II began and he ended up in the signal intelligence branch, the Army Security Agency. He would credit his military service with an important advancement in his education: He was assigned to monitor communications of the Japanese army, a discipline called “traffic analysis.”

“I later realized that some of the historical research I did was really, in a way, traffic analysis, in a different form,” he said in a 1994 interview with The William and Mary Quarterly.

Bailyn went on to Harvard, received a PhD. in history and taught there for more than 40 years. He was known for his unpredictable reading assignments and even for recommending “Hill Street Blues” to help students find coherence in a confusing narrative. But many in his class revered him and became leading historians themselves, including such Pulitzer winners as Gordon Wood and Jack Rakove.

Bailyn was not universally praised. Some historians believed he idealized the founders and paid too little attention to the elite economic status of George Washington and others. Bailyn would even find himself accused of a pro-British bias. “The Ordeal of Thomas Hutchinson,” a sympathetic biography of the colonial-era Massachusetts governor who sided with the British, was published in 1974, not long before President Nixon’s resignation. “The Ordeal” won the National Book Award but was also attacked as a tribute to blind loyalty.

“I wanted to give the view of a major, literate opponent (of the revolution),” Bailyn told The Associated Press in 2003, saying he found poignancy in the story of a well-intentioned man on the wrong side of history.

But at least one famous critic of Nixon and hero of the left, Daniel Ellsberg, was moved to tears by the historian.

In the early 1970s, the former defense analyst had leaked the government documents known as the “Pentagon Papers,” a history of the United States’ involvement in Vietnam. Ellsberg became a hero to the anti-war movement, but a traitor to the Nixon administration and others. He was indicted under the Espionage Act and Nixon aides authorized the burglary of the offices of his psychiatrist.

Speaking to The New York Times’ J. Anthony Lukas in 1971, Ellsberg reached into his briefcase and took out a paperback of “Ideological Origins.” One passage, near the end, would make him weep out loud:

“But some, caught up in a vision of the future in which the peculiarities of American life became the marks of a chosen people, found in the defiance of traditional order the firmest of all grounds for their hope for a freer life,” Ellsberg read.

“It was only where there was this defiance, this refusal to truckle, this distrust of all authority, political or social, that institutions would express human aspirations, not crush them.”

After a dozen readings, Ellsberg explained, he still wept just from saying the words out loud.

‘The Vanishing Half’ nominated for National Book Award 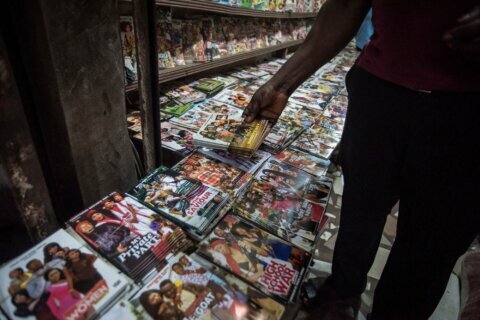