‘Parasite,’ ‘Bombshell’ get a boost in SAG nominations

NEW YORK (AP) — Scarlett Johansson received two individual nominations, “Parasite” scored a best ensemble nod and both “The Irishman” and “Once Upon a Time … in Hollywood” solidified their Oscar favorite status in nominations announced Wednesday for the 26th Screen Actors Guild Awards.

The SAG Awards are one of the most closely watched Academy Awards bellwethers because, historically, a best ensemble nomination from the actors is usually a prerequisite for any best-picture contender’s resume. Actors make up the largest percentage of the film academy, giving them the greatest influence of any branch.

The actors guild, as expected, nominated both Martin Scorsese’s Netflix opus and Quentin Tarantino’s Hollywood fable for best ensemble, along with a pair of individual acting nods: Al Pacino and Joe Pesci for “The Irishman” and Leonardo DiCaprio and Brad Pitt for “Once Upon a Time.” Each film also added stunt ensemble nominations.

“Parasite,” the much-praised Korean film, became just the second foreign language film to be nominated for the SAGs’ top award. Only “Life Is Beautiful” managed to do it before, in 1997. Already one of the year’s most critically acclaimed films, “Parasite” looks assured of a rare best-picture nomination for a foreign language film.

Notably missing out on the best ensemble nomination was Noah Baumbach’s divorce drama “Marriage Story,” which on Monday led the Golden Globe nominations with six nods. It still came away with acting nominations for its leads, Adam Driver and Johansson, and Laura Dern for best female actor in a supporting role. Johansson was nominated in that category, as well, for her performance in “Jojo Rabbit.”

Recently, a SAG ensemble nomination hasn’t been quite as vital for a best-picture winner at the Oscars. The last two winners, “Green Book” and “The Shape of Water,” managed the feat without a nod for the screen actors’ top award. Before that, it had been two decades since the SAG Awards didn’t help predict the eventual best-picture winner.

Nothing got more of a boost from the actors guild than “Bombshell,” which tied “The Irishman” and “Once Upon a Time … in Hollywood” with a co-leading four nominations. Critical reception has been mixed for “Bombshell,” a starry dramatization about the culture of sexual harassment at Fox News. It opens in theaters Friday. But along with the significant ensemble nod, the actors guild nominated its three stars: Charlize Theron (lead actress), Margot Robbie and Nicole Kidman. Kidman also scored a nod for her performance in HBO’s “Big Little Lies.”

Along with Theron and Johansson, the nominees for best performance by a female actor in a leading role were: Cynthia Erivo (“Harriet”), Lupita Nyong’o (“Us”) and Renee Zellweger (“Judy”). Those picks omitted Saoirse Ronan (“Little Women”) and Awkwafina (“The Farewell”).

Tom Hanks (“A Beautiful Day in the Neighborhood”) and Jamie Foxx (“Just Mercy”) were nominated for best male actor in a supporting role. Jennifer Lopez (“Hustlers”), looking more and more like a lock for her first Oscar nomination, also joined the best female in a supporting role category.

Usually, about four out of five individual SAG nominees go on to land an Oscar nomination.

The SAG Awards will be presented Jan. 19 and broadcast live on TNT and TBS. 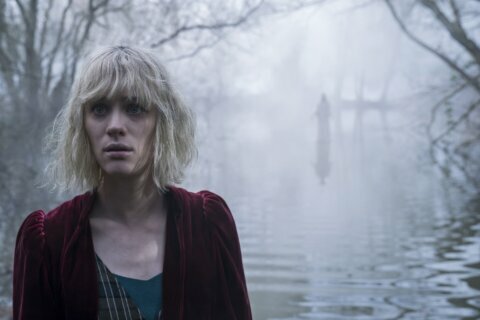 Review: Um, what? ‘The Turning’ is a muddled take on madness