The 2020 presidential election could be decided by just a handful of states and, if anything like 2016, only a small margin of votes in those states could determine the outcome.
Listen now to WTOP News WTOP.com | Alexa | Google Home | WTOP App | 103.5 FM

The 2020 presidential election could be decided by just a handful of states — and if the race is anything like 2016’s, only a small margin of votes in those states could determine the outcome. As of 1:30 a.m. ET on Wednesday, CBS News has projected President Trump as the winner in Florida, Iowa, Ohio and Texas and Joe Biden as the winner in New Hampshire and Minnesota. The other states have yet to be projected.

Regardless of the popular vote, the next president will be decided by which candidate, Mr. Trump or Biden, can win at least 270 votes in the Electoral College.

This year, CBS News polling had identified six “toss-up” states, and seven more that are leaning toward one candidate but could still swing either way.

These are the 13 states to keep an eye on during Election Day:

Mr.  Trump won the state by roughly 3.5 percentage points in 2016. Phoenix’s Maricopa County — which accounts for about 60% of the state’s votes — was the largest county that went for Mr. Trump in 2016. No Democratic presidential nominee has won Arizona in 24 years, since Bill Clinton took the state, and the state has gone red in every presidential election since 1952 with the exception of 1996.

Biden has gained on Mr. Trump with support from the state’s large senior population. Early voting data analyzed by Arizona data firm OH Predictive Insights ranks 65 and older voters as by far the largest return rate of all age groups in Maricopa County since early voting kicked off.

Nearly 1 in 5 Arizona residents are 65 or older.

“Having seniors be very much disproportionately affected by the COVID-19 outbreak here has really shifted some of them who are ordinarily somewhat conservative voters to the Democratic column,” Smith said.

Almost half of Arizona seniors say Mr. Trump’s response to the outbreak has put seniors and older voters at risk for coronavirus, and 95% of seniors who feel that way are backing Biden.

Democrats are also hoping to capture the Senate seat. Incumbent Republican Senator Martha McSally lost in 2018 to Democrat Kyrsten Sinema and then was appointed to the late Senator John McCain’s seat. McSally has been consistently trailing Democrat Mark Kelly in polls.

CBS News projected Mr. Trump as the winner in Iowa.

The state voted for former President Obama in both 2008 and 2012, Mr. Trump won Iowa by 10 points in 2016. Despite gaining ground lost by the Democrats in 2016, Biden has been unable to pull ahead in Iowa, as Mr. Trump still has a large advantage among voters without a college degree and White evangelicals, a group that made up a third of Iowa’s electorate in 2016.

A Des Moines Register poll released on the Saturday before Election Day had some hope for Mr. Trump, showing him opening up a 7 point advantage over Biden, 48% to 41%. Mr. Trump will be in Dubuque. Iowa, on Sunday to campaign, and the campaign announced shortly after the poll was released that Ivanka Trump will visit Des Moines on Monday.

Shortly after midnight ET on Wednesday, CBS News projected Mr. Trump as the winner in Ohio.

Ohio is a crucial victory, not just for its 18 Electoral College votes but because the winner of Ohio has also taken the White House for the last 14 presidential elections, including when the state turned red in 2016.

University of Dayton political science professor Nancy Martorano Miller told “CBS This Morning” co-host Tony Dokoupil that she’s surprised Mr. Trump has not been able to secure a lead in the state.

“There’s an increasingly growing gap with suburban women,” Miller said. “And, you know, it is so much harder to run as the incumbent. It’s very easy to run as, ‘I am something different, I see you. I’m going to help you.'”

As of 11 p.m. on election night, CBS News estimated North Carolina as a toss-up.

A U.S. Court of Appeals ruled that mail-in ballots postmarked by 5 p.m. on Election Day should be accepted until November 12, the News & Observer reports. State Republican leaders and the Trump campaign filed appeals to the decision on Thursday.

As of 11 p.m. on election night, CBS News estimated Georgia as a toss-up.

Early in-person voting numbers have already broken records, with close to two million people turning out to the polls. Georgia’s Secretary of State Brad Raffensperger told CBSN that early voting and absentee voting —  a process that Mr. Trump has, without evidence, linked to fraud — is the easiest and most secure way for residents to cast their ballots.

Greg Bluestein, a political reporter for the Atlanta Journal-Constitution, told CBSN host Elaine Quijano that the surge in early voting appears to favor Democrats, but said nothing is sure until Election Day.

Just after 1 a.m. on Wednesday, CBS News projected Mr. Trump had won Florida. With its 29 electoral college votes — and Mr. Trump’s adopted home state since he changed his residence to Mar-a-Lago — Florida was a coveted prize.

Almost 2.5 million people voted early as of Sunday, nearly surpassing the total number of votes cast in the state in the entire 2016 election.

The president has been to Florida to campaign more than a dozen times this year, compared to Biden who has been three times.

Dozens of voters in Alachua County, Florida, a heavily Democratic county, reported receiving emails purporting to come from the right-wing group the Proud Boys, threatening to “come after” them unless they vote for Mr. Trump.

Alachua County is home to the city of Gainesville and the University of Florida, making it a Democratic stronghold in a deep-red part of the state. The county voted for Hillary Clinton over Mr. Trump in 2016 by a margin of 58% to 36%.

Nevada has gone Democratic since 2004, and did so again two years ago during the 2018 midterm’s “blue wave.” Despite recent gains, political strategists and organizers warn that Nevada remains a swing state this year.

According to CBS News polling, most Hispanic voters feel the Trump campaign is paying too little attention to the needs and concerns of Hispanic people.

The Trump campaign and Republicans in Nevada are threatening the battleground state’s most populous county with legal action over what they argue is a “blatant disregard for accountability and transparency” in the ballot counting process.

GOP attorneys said in a letter this week that Clark County requested to place cameras throughout the ballot counting facility, and complained that counting board members are mishandling ballots in a way that “undermines the American norm of ballot secrecy.” Democrats in the state dismissed the letter as “yet another blatant attempt to suppress voter turnout.”

CBS News has projected Mr. Trump as the winner in Texas.

Mr. Trump won the deep red state by 807,179 votes in 2016, or about 9 points. But that margin was less than Mitt Romney’s victory in 2012, a warning sign for Republicans, and Democrats made major gains in the 2018 election.  Early voter turnout in the state surpassed 2016’s total voter turnout.

In September, voters in both Florida and Texas said the president would do a better job handling the economy, and many more Texas voters said Mr. Trump’s economic policies would help their family’s financial situation.

However, Hispanic Texas voters’ support for Biden is widespread and cuts across generational lines. Six in 10 Hispanic likely voters in the state, young and old, currently support Biden.

Mr. Trump announced he had tested positive for COVID-19 after returning from a rally in Minnesota on September 30. The president used the platform to go after refugees and Representative Ilhan Omar.

Minnesota has not chosen a Republican for president since 1972, but Mr. Trump narrowly lost the state in 2016.

As of 11 p.m. on election night, CBS News estimated Wisconsin is a toss-up.

According to the CBS News Battleground Tracker earlier this week, Biden was leading Wisconsin by 5 points, with a margin of error of 3.5 percentage points. Biden appears to have cut into the president’s 2016 support levels with key groups like men, White, non-college voters and seniors.

Wisconsin, like Arizona, has an older electorate who tend to vote Republican. A recent rise in coronavirus cases, however, could sway that key demographic for Mr. Trump. Biden supporters note that the virus as a major reason they’re choosing him over Mr. Trump, believing he would handle the outbreak better.

As of 11 p.m. on election night, CBS News estimated Michigan as a toss-up.

Mr. Trump narrowly flipped the state red in 2016; the shift, along with other Rust Belt states Wisconsin and Pennsylvania, helped him secure the White House.

Flipping Michigan is crucial to Democrats to win the White House. Former President Obama joined Biden on the campaign trail in Michigan on the Saturday before Election Day.

CBS polling shows that Mr. Trump’s razor-thin 2016 victory — just 10,704 votes — could be threatened this year by how he’s handled the coronavirus. More Michigan voters say his response made them feel angry, rather than confident, and most said they think the Trump administration’s policies are making the outbreak worse.

It is unclear if Mr. Trump’s unfavorable coronavirus response is significant enough to determine how the state swings. Michigan voters are divided over which candidate will handle the economy better, and about a third who said they are voting for Trump also say they dislike the way the president handles himself.

In Western Michigan, long a Republican stronghold, Democrats are optimistic that success in recent elections indicate that the race is tighter than the polls show.

As of 11 p.m. on election night, CBS News estimated Pennsylvania as a toss-up.

Pennsylvania holds 20 votes on the Electoral College map, making it one of the most valuable election prizes. Mr. Trump carried Pennsylvania by less than 1% in 2016.

The state is home to more than 700,000 union members, a key group that Mr. Trump capitalized on in 2016. Mr. Trump won more union votes nationwide than any Republican presidential candidate since Ronald Reagan; in Pennsylvania, he won White voters without college educations by a margin of more than 2 to 1.

Winning Pennsylvania may again come down to blue-collar workers — specifically those in the state’s booming fracking industry. Some 32,000 Pennsylvania workers are employed in the fracking and natural gas industry.

Biden told voters there in July that fracking “is not on the chopping block,” but he took a hit in March when he appeared to say he wanted “no new fracking.” Groups supporting the Trump campaign quickly weaponized the comments in the gas-rich state.

Biden and Harris later doubled down on maintaining the practice. Harris explained at the vice presidential debate that the Biden administration’s climate plan would focus on creating new jobs, and that “part of those jobs… are going to be about clean energy and renewable energy.”

Vice President Mike Pence held a campaign rally in Portsmouth on October 21 as part of an aggressive travel schedule through battleground states. He rallied the crowd by claiming Biden is a socialist who will raise taxes, and promising economic revival under President Trump’s second term. 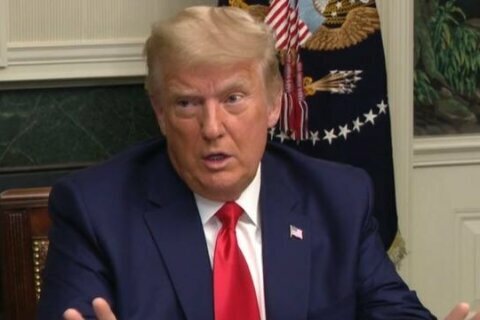