Grassroots efforts are working to get people to the polls in an election where, it's safe to say, nothing is normal.
Listen now to WTOP News WTOP.com | Alexa | Google Home | WTOP App | 103.5 FM
(1/16) 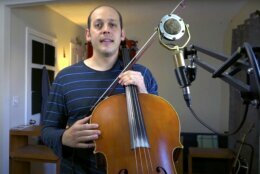 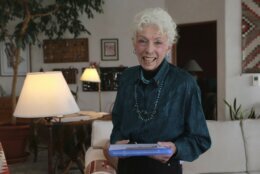 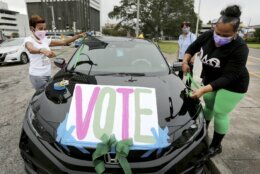 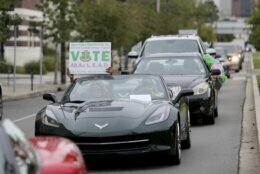 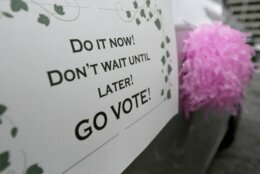 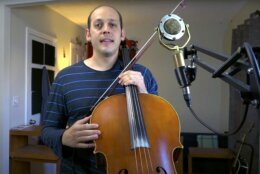 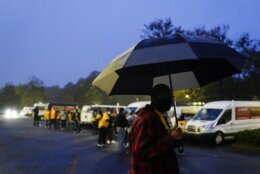 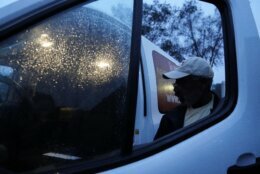 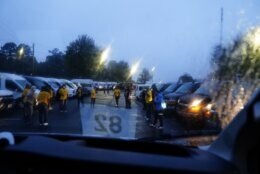 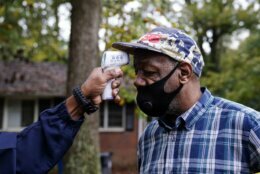 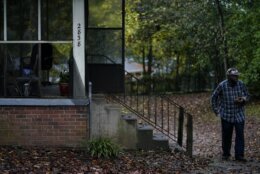 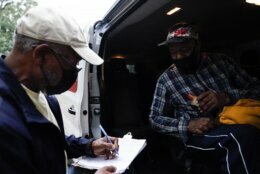 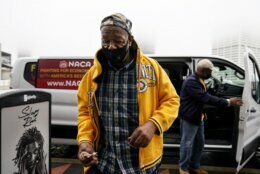 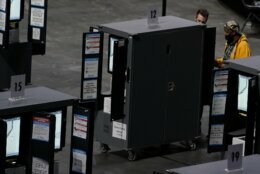 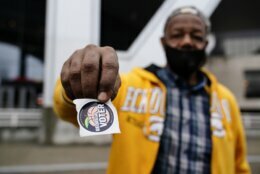 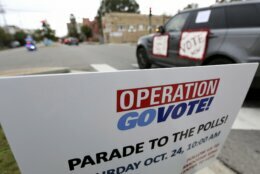 Sometimes her hand hurt, but Nancy Gehman kept writing. Every evening from July until mid-October, the 85-year-old retiree sat with a gel pen, writing notes imploring fellow Americans to find a way to vote.

“It was comforting to know that I was doing something productive,” she says.

Gehman, who lives in Santa Fe, New Mexico, is one of 182,000 people who have participated in Vote Forward, a 50-state letter-writing campaign to more than 17.5 million homes. The grassroots effort is one of countless ways in which individuals and organizations are working to get people to the polls in an election where, it’s safe to say, nothing is normal.

In the best of times, it’s a massive logistical challenge to get millions out to vote. In 2020, the difficulty has been compounded: by fear of the coronavirus, by complications and confusion over mail-in ballots, by palpable anxiety over the bitter divisions in the country.

As early voting has surged dramatically, with more than 73 million people estimated to have cast ballots, advocates have been mobilizing in myriad ways, from neighborhood groups to national movements, from block associations to college marching bands to lone violinists. Voters have been ushered to the polls by fleets of minivans, with bicycle parades and on horseback in Indian Country. When they get there, they’re sometimes welcomed by a cello performance or a dance party.

Often unable to knock on doors or chat in person because of virus concerns, advocates have had to adapt. They’ve been texting and phone banking, holding drive-in rallies and organizing caravans.

What unites these efforts is the certainty that this is an election year like no other, and that voting is essential.

In Native American tribal communities devastated by the coronavirus, from job losses to sickness and death, advocates are mindful of causing further stress.

“As much as we know voting is important and necessary … people are struggling,” says advocate Ahtza Dawn Chavez. “In some ways, a lot of it can come off as just being insensitive.”

In a normal election cycle, Chavez, who lives in Albuquerque and is Navajo and Kewa, and colleagues would knock on doors and sit down for coffee. Now, they’re relying on ambassadors within communities to talk with their neighbors. They’re also using robocalls, phone banking and mass texting. Of special concern are older adults.

“Our elderly are basically our library, they are our encyclopedia, our historical and cultural knowledge holders,” Chavez said. “Making sure people have a safe way to cast their votes and access their polling locations was something we were very concerned about.” In Arizona’s Indian Country, “Ride to the Polls” has targeted younger voters with organized groups on horseback.

It’s not only the coronavirus that’s been an obstacle. In North Carolina, civil rights leader the Rev. William Barber II and others have been training clergy members to mobilize their congregations and make sure they know their options and rights, and to push back against any misinformation that might prevent them from voting.

In 2016, Patrisse Cullors, one of the creators of Black Lives Matter, hadn’t thought about how she could leverage the platform to get out the vote. Now, after an unprecedented surge of Black Lives Matter-themed protests in recent months, Cullors and the foundation are hosting pandemic-safe drive-in rallies, text-banking voters and leveraging the millions of dollars in donations to run ads focused on the Black vote, Cullors said.

In Louisville, Kentucky, a city that has been rocked by demonstrations over the killing by police of Breonna Taylor, community groups, voters and activists have joined together in a parade of cars, trucks and buses through the city’s predominantly Black West End in an effort to get out the vote. The effort, called “Protest to the Polls,” is led by the Louisville Urban League and aims to take the summer’s demands for racial and social justice to the ballot box, said Sadiqa Reynolds, president and CEO.

“We are reclaiming our votes,” she said.

Some get-out-the-vote efforts have involved large-scale planning; others have been the work of one or two people with a sudden idea.

On the larger side is the nonprofit Neighborhood Assistance Corporations of America, which has deployed a fleet of vans in southwest Texas and Atlanta, and recently expanded to Charlotte, North Carolina. The vans have carted 25,000 people to the polls, said media coordinator Tim Trumble.

The community justice organization hopes it sends a message: Voter suppression efforts in minority communities will backfire. The 15-passenger vans, which accommodate six people with social distancing, get going as the sun comes up and drive all day, and are sanitized between each trip.

On the smaller side: “Play for the Vote,” a nonpartisan effort by Boston cellist Mike Block that has organized musicians to play for voters while they wait to cast their ballots. Block came up with the idea while practicing his instrument the morning after the chaotic first presidential debate.

“I thought, ‘The music is helping me — maybe I should just go down to my polling location and play.’ It became obvious how great it would be if every musician did that,” he said.

So Block, 38, has since enlisted several hundred musicians from 39 states and the District of Columbia who will perform classical, folk, bluegrass, country, hip hop or rock — but nothing with a political bent — for voters stuck standing in long lines. Participants range from musicians with New York’s Metropolitan Opera orchestra to a high school orchestra in Wyoming.

Also on the musical front, “Joy to the Polls” seeks to make a memorable experience of waiting in line to vote. A recent video on social media showed voters in Philadelphia dancing joyfully as they waited, alongside members of the Resistance Revival Chorus.

In Cincinnati, Diane Cunningham Redden, an official with the Hamilton County Republican Party, has been holding small, socially distanced patio gatherings, on the theory that “if 28 people each go home and talk to five friends, those are votes.”

Some voters are wary of catching the virus by voting in person, but they’re also concerned about the mail-in option. In Columbus, Ohio, 80-year-old Carol Tonkins requested an absentee ballot this year for the first time, but didn’t totally trust the mail.

So she called Katie Beaumont, who directs a program, At Home on High, that helps older adults like Tonkins stay home by providing transportation, yardwork, shopping and other services. Beaumont dropped Tonkins’ ballot off last Wednesday. “We don’t care the way you vote. We just want you to vote,” Beaumont said.

In some cases, new strategies have yielded unexpected benefits.

In Sacramento, California, advocate Nichole Rice can’t knock on doors because of the coronavirus, and she can’t make phone calls because of her two small, sometimes loud, children.

Instead, she’s texting hundreds of people every day from an app on her phone. She says that when she can convince them she’s not a robot — which takes some doing in 2020 — she can have extended conversations with many more voters than she ever would have knocking on doors.

It’s led to some vulnerable moments. Rice said one voter said her priorities had changed because her husband had just undergone bypass surgery. Another person revealed her husband was cheating on her.

“People are way more willing to disclose things … than they ever did in person,” she said.

In Mississippi, which has some of the country’s most restrictive voting regulations — rules that historically have kept African Americans from voting — retired educator Fran Bridges has been volunteering with several neighborhood associations in Jackson to conduct street-by-street registration.

The idea was that people might be more inclined to register if contacted by their neighbors. She enlisted one person to be the point person for each street. They covered at least 100 streets that way.

Like Gehman in New Mexico, Radha Pyati in Philadelphia has devoted untold hours to writing letters as part of Vote Forward.

“I don’t want to wake up on the morning of Wednesday, Nov. 4, and feel I didn’t try as hard as I possibly could,” she said.

There’s at least some evidence that her efforts and those of fellow letter writers have had an impact. One recipient, Carlos Flores in Miami, said he’d already been planning to vote, but the passionate letter he received from Portland, Oregon, on Tuesday got him fired up.

A bakery owner, Flores, 34, voted this week in his first presidential race since gaining citizenship in 2018.

“Lots of people in the world can’t vote,” Flores said. “This is a privilege. Every vote counts.”

This story corrects spelling of Radha in paragraph beginning ‘Like Gehman…’

What is the GSA, and what role does it play in the transition?