Inaction by Congress leaves states to pay for election costs

ATLANTA (AP) — Congress’ failure so far to pass another round of coronavirus aid leaves state and local officials on their own to deal with the soaring costs of holding a presidential election amid a deadly pandemic.

That could leave them scrambling to solve problems that surfaced during the primary season in time for November’s election.

The coronavirus outbreak has triggered unprecedented disruptions for election officials across the U.S. They are dealing with staffing shortages and budget constraints while also trying to figure out how to process a flood of absentee ballot requests, as more and more states have moved to mail-in balloting as a safer way to vote.

In its first round of virus relief in March, Congress sent $400 million to state election offices to help cover unexpected costs related to the pandemic. But that is far short of the $2 billion the Brennan Center for Justice has said is needed.

“Congress’s failure to reach a coronavirus deal is imperiling November’s elections,” said Wendy Weiser, director of the center’s democracy program. “Without an infusion of federal funds, election officials simply won’t be able to prepare adequately for the election, and we will see massive meltdowns across the country.”

In the U.S., state and local officials are responsible for administering elections and covering the costs. But there was no way for them to plan for holding an election in the middle of a pandemic, essentially having to deal with a massive surge in absentee ballots while also trying to keep in-person voting options available after many workers opted out of staffing the polls during the primaries.

Experts point to the rocky execution of the primaries since the pandemic began, in which there were numerous reports of absentee ballots failing to arrive or rejected for being late. Primaries were marred by hours-long lines in Atlanta, Milwaukee and Las Vegas as polling places were consolidated.

“Without proper funding, guidance and preparedness, the problems seen in previous elections are going to be just the tip of the iceberg this November,” Sylvia Albert, voting and elections director with Common Cause, warned lawmakers during a congressional hearing last week.

If more federal money is made available, it could allow local election offices to hire more temporary workers to help process ballot requests and count ballots on Election Day. It also could be used to boost the pay of poll workers.

In Ohio, Secretary of State Frank LaRose has said he would seek approval to pay postage for absentee ballot applications and returned ballots if he had more money.

In New Mexico, state election regulators are anticipating a $6 million shortfall without additional funding for the November general election. Of the nearly $3.9 million New Mexico received in the first round of congressional virus relief, all but $750,000 was spent during the primary, according to Alex Curtas, spokesman for Secretary of State Maggie Toulouse Oliver.

U.S. Sen. Amy Klobuchar of Minnesota, who has been pushing for more funding for elections, said she remains hopeful a deal can be reached. But she warned that the window was closing for states to take action, such as paying the cost of postage, purchasing drop boxes for ballots, and recruiting and training a new group of poll workers. 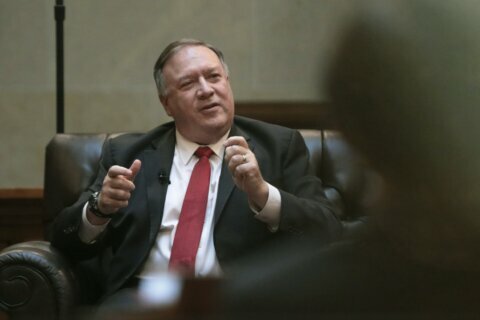