ANNANDALE, Va. (AP) — Virginia Attorney General Jason Miyares is launching an investigation into one of the state’s most prestigious high schools, acting on complaints that students there weren’t properly recognized for their achievements on a standardized test.

Miyares said at a news conference Wednesday that his Office of Civil Rights is investigating the Thomas Jefferson High School for Science and Technology not only for its failure to timely notify students of a commendation they received in a scholarship competition, but also the school’s recently overhauled admissions policies.

The public high school commonly known as TJ is located in the Washington, D.C., suburb of Fairfax County and regularly ranks as one of the best in the country. Admission to the school is highly competitive, and parents map out strategies to gain entry for their children years in advance.

A majority of students are Asian American and for many years African American and Hispanic students have been woefully underrepresented. In 2020, the Fairfax County School Board dramatically overhauled the admissions process, scrapping a high-stakes standardized test and setting aside a certain number of seats on a geographic basis.

The changes prompted claims of discrimination against Asian Americans who had fared well under the old system, and a federal lawsuit challenging the new procedures is going through the appeals process.

The politically charged atmosphere at the school has continued, so last month when news broke that the school delayed notification to students that they had earned “commended student” status in the National Merit Scholarship competition, some parents complained that the delays were part of a continued “war on merit” at the school that favors equal outcomes for all students over individual achievement.

Miyares said the Office of Civil Rights will investigate whether racial discrimination fueled either the admissions changes or the failure to quickly notify students of the National Merit commendations.

“We’re going to get to the bottom of this,” he said. “That’s why we have the investigation.”

Miyares called TJ “one of the jewels of the commonwealth” and cited its importance to immigrant families looking to establish themselves in America in his remarks.

“That doorway at Thomas Jefferson High School is that doorway to the American dream,” he said.

The school system has said it’s conducting its own investigation into the commendations but preliminarily attributes it to “a unique situation due to human error.”

Students who receive the “commended student” award finish in the top 3% nationally on a standardized test, but below the top 1% that qualifies them as a scholarship semifinalist.

Letters dated September 2022 from the National Merit competition weren’t distributed at the school until mid-November. Parents said the notification was too late for students to include the commendation in early-decision college applications that are increasingly common for students seeking to attend elite universities. 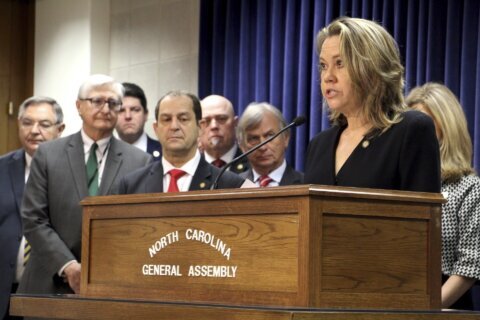