Holidays: Where to see holiday lights | Santa's back with inflation, inclusion on his mind | 4 ways to limit your holiday debt | Inflation 'definitely a guest' at holiday celebrations this year
Home » Education News » Texas chief says state…

Texas chief says state police ‘did not fail’ in Uvalde

AUSTIN, Texas (AP) — Texas’ state police chief said Thursday that his department “did not fail” Uvalde during the hesitant law enforcement response to the Robb Elementary School shooting, as a Republican congressman joined angry parents of some of the 19 children killed in the May attack in calling for him to resign.

Col. Steve McCraw, the head of the Texas Department of Public Safety, acknowledged mistakes by officers while several Uvalde families confronted him in Austin over multiple outrages: why police waited more than 70 minutes before entering the fourth-grade classroom and killing the gunman, false and shifting accounts given by authorities, and records that remain withheld more than five months later.

But McCraw defended his agency, and during a meeting of the state’s Public Safety Commission, made the case that failures uncovered to date did not warrant his removal while saying he was not shirking from accountability. Uvalde families bristled and asked how DPS could not have failed, given that troopers were among the first on the scene.

“I can tell you this right now, DPS as an institution, right now, did not fail the community,” McCraw said. “Plain and simple.”

Significantly, Republican Rep. Tony Gonzales said for the first time after the meeting that McCraw should also lose his job, becoming the first major figure in the GOP to call for a change at the top of Texas’ state police force. Gonzales, a former Navy officer, represents the sprawling South Texas district that includes Uvalde.

“DPS Director McCraw should RESIGN immediately,” Gonzales tweeted. His office has not responded to a message seeking further comment Thursday.

McCraw said a criminal investigation into the police response to the shooting led by Texas Rangers would be wrapped up by the end of the year and turned over to prosecutors. He offered no indication as to whether the findings would result in charges against any of the nearly 400 officers who went to the school where two teachers were also killed. Two officers have been fired in response to their actions at the scene and others have been placed on leave.

Each of the board members were appointed by Republican Gov. Greg Abbott, a longtime supporter of McCraw. The board did not ask McCraw any questions about Uvalde before moving on to other business.

Families of children killed in the attack have spent months accusing the Department of Public Safety of slow-walking the investigation, withholding information and trying to minimize its responsibility. There were 91 state troopers on the scene, including some that body camera later revealed were among the first officers to arrive.

Last week, the department fired one of seven troopers subject to an internal investigation into their actions during one of the deadliest classroom shootings in U.S. history.

Jesse Rizzo, whose 9-year-old niece Jacklyn Cazares was among the victims, said misleading and false comments from authorities about the police response has compounded the small town’s grief and eroded trust in law enforcement.

“The aftermath that came after that was absolutely unacceptable, hurtful, painful,” Rizzo said. “Every single time seemed like lie after lie, disinformation.”

McCraw on Thursday apologized for the department originally saying that the gunman had been able to gain access to the school because a teacher had propped open an exterior door with a rock. The teacher had gone back and shut the door, but it did not lock.

McCraw insisted his department “did not fail the community,” drawing condemnation from the assembled Uvalde families.

“If you’re a man of your word then you would retire,” Brett Cross, the uncle of 10-year-old victim Uziyah Garcia, told McCraw. “But unfortunately it doesn’t seem like you’re going to do that because you keep talking in circles.”

Another of the state troopers under internal investigation was Crimson Elizondo, who resigned and later was hired by Uvalde schools to work as a campus police officer. She was fired less than 24 hours after outraged parents in Uvalde found out about her hiring.

More on the school shooting in Uvalde: https://apnews.com/hub/uvalde-school-shooting 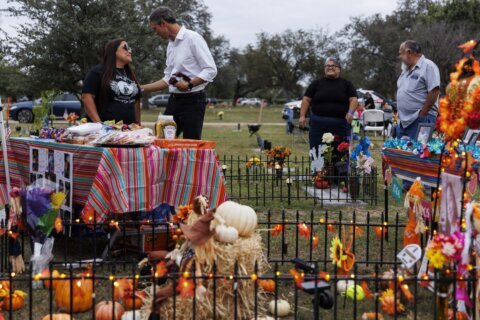