Holidays: 'Enchant' shines with millions of lights in Nats Park | Where to see holiday lights | Send in photos of decorations | How to give greener this season
Home » Education News » 'Desperation': Child care struggle…

A shortage of child care in the U.S. has become so acute that it’s reaching far into rural communities, including one northwestern Oregon county where future embryos are in line for a spot.
Listen now to WTOP News WTOP.com | Alexa | Google Home | WTOP App | 103.5 FM
(1/10) 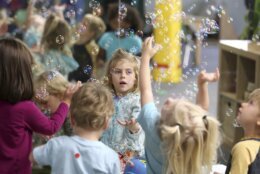 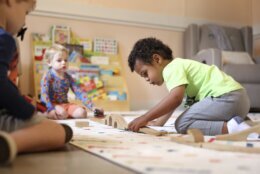 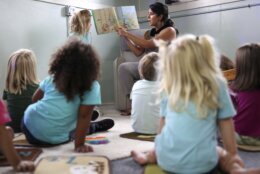 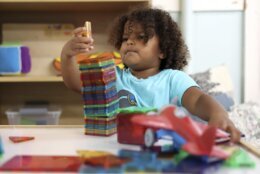 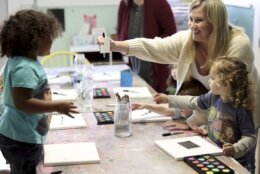 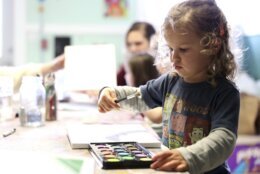 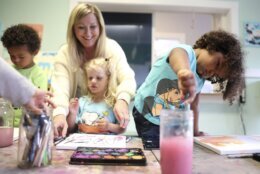 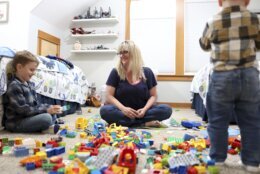 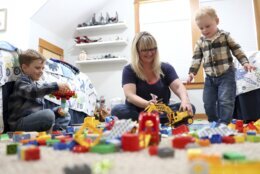 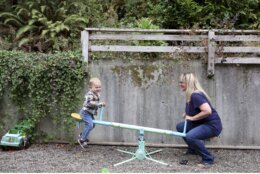 ASTORIA, Ore. (AP) — A shortage of child care in the U.S. has become so acute that it’s reaching far into rural communities, including one northwestern Oregon county where future embryos are in line for a spot at Amy Atkinson’s nursery and preschool.

“We have children that have not been implanted yet that are on our waitlist,” said Atkinson, referring to in vitro fertilization. “It’s desperation.”

Just past Bumble Art Studio’s rainbow-painted entryway, cubbies are filled with diapers and tiny backpacks. Every crib and little plastic chair is spoken for in the only licensed center offering infant care in Oregon’s historic port town of Astoria, where the wide mouth of the Columbia River flows into the Pacific Ocean.

Parents trying to enroll children in the facility can spend months or even years on a 40-family waitlist.

“I haven’t even been able to answer my phone because it’s been nonstop,” said Angie Jannusch, the center’s co-director along with Atkinson. “We keep taking all of the emails and dumping them into a waitlist folder … we’re busting at the seams. There’s nothing available.”

Half of U.S. residents live in child care deserts where fewer than a third of children have access to a slot at a licensed facility, according to the Center for American Progress, a liberal think tank that has published reports on the issue. Access challenges have forced many parents to change jobs, reduce their hours or quit altogether.

When Capri Jackson’s son was born in March, she had to leave her job at a victim services agency in Colville, a rural town of about 5,000 in northeastern Washington state.

“There is not a single certified child care space,” Jackson said. “We hear that child care is hard to find, but not that it’s not actually existent.”

The coronavirus pandemic shone a spotlight on the national child care crisis as an estimated 10% of the country’s programs shuttered. Between December 2019 and March 2021, about 16,000 programs permanently closed across 37 states, according to a report from Child Care Aware of America, a national network of child care resources and referral agencies.

Oregon is among 11 states where at least 60% of residents live in a child care desert, according to Center for American Progress data. Utah ranks highest, with 77%.

“We have an especially dire situation when it comes to infant-toddler care,” said Linda Smith, director of the early childhood initiative at the Bipartisan Policy Center, a nonprofit public policy think tank. “Adding more infants into this unmet need is just going to make the problem worse.”

Jeanine Conboy runs one of two licensed, full-time day cares in northeastern Oregon’s rural Gilliam County, an area larger than the state of Rhode Island where wheat fields and rangeland stretch across the Columbia Plateau.

Conboy’s center in the small town of Condon is full and the waitlist is double her capacity. On the five days a year she closes for teacher training, “there’s no one else — we are it here,” Conboy said.

Those closures ripple throughout the community.

Low pay and lack of benefits are fueling the nationwide shortage, as providers scramble to retain workers.

The median hourly wage for child care workers is $11.43, according to May 2021 figures from the Bureau of Labor Statistics. Starbucks, Target and Amazon offer a minimum wage of $15 an hour for entry-level positions with no certification requirements. Providers are struggling to match those wages in a tight post-pandemic labor market.

With inflation at a 40-year high, many parents are facing a dilemma — they can’t find child care, but they can’t afford to stay home.

The national average cost of child care is $10,174 a year, more than 10% of the median income for a married couple in 2020, according to Child Care Aware of America. The U.S. Department of Health and Human Services considers child care affordable if it does not exceed 7% of a household’s income.

Second-grade teacher Maddy Buoy is unable to find care in the small rural town of Knappa, about 15 miles (22.5 kilometers) east of Astoria along the Columbia River. Her husband works nights at Domino’s Pizza so they can trade off watching their 2-year-old son.

“A day care bill is a mortgage right now,” she said.

To address the shortage, counties and states have leaned on federal emergency coronavirus funds. Commissioners in Clatsop County, home to Astoria and Knappa, voted to spend $500,000 of their federal relief money on child care. The money will finance new grants to help providers retain staff, expand capacity and improve access for families.

The $1.9 trillion coronavirus relief bill passed by Congress last year included $39 billion to stabilize child care, sending a lifeline to many providers. But much of the funding expires in 2024.

President Joe Biden’s Build Back Better act initially proposed investing $400 billion in child care. But the final budget reconciliation package he signed in August, after being pared down to the much slimmer Inflation Reduction Act, contained no funding for it at all.

“It’s hard to imagine lawmakers would advance an effort to ease the burden of inflation on working families that fails to address the single largest expense many families face: child care,” Sarah Rittling, executive director of the advocacy group First Five Years Fund, said in a statement in July when the Senate revealed the details of the final bill.

Meanwhile, many states have sought to tackle the problem.

Earlier this year, Oregon lawmakers approved $100 million in child care spending. Montana Gov. Gianforte and state public health officials announced $18 million in grants for areas known to be child care deserts. In New York, where an estimated 64% of residents live in a child care desert, lawmakers passed a budget that includes $7 billion in child care funding over the next four years that will, in part, raise the income cap to get financial assistance. In New Mexico, voters in November will be asked to amend the state’s constitution to increase public funding for early education.

But those efforts have yet to reach many parents as the pandemic continues to worsen the national child care shortage.

In Gearhart, a town of 1,900 residents about 14 miles south of Astoria, Karli Neilson takes time off and works part-time so that she can watch her 2-year-old son. She hasn’t been able to find formal care since he was born.

“It just got to be like a part-time job just doing the research and trying to find a place,” Neilson said. “Child care issues probably cause me more anxiety than anything else ever has in my life.”

Rush is a corps member for the Associated Press/Report for America Statehouse News Initiative. Report for America is a nonprofit national service program that places journalists in local newsrooms to report on undercovered issues. Follow her on Twitter: @ClaireARush