Round 2 of NFL draft has plenty of tantalizing possibilities

Georgia’s defense dominated the first round of the NFL draft 3 1/2 months after whipping Alabama in the national championship game.

The surprising part was that linebacker Nakobe Dean wasn’t among the Bulldogs whose names were called Thursday night.

Dean, who watched a half-dozen of his ex-teammates get selected in the first round, is among the top prospects on the board Friday night in Round 2.

At 5-foot-11 and 229 pounds, Dean is smaller than some personnel evaluators prefer, but his coverage skills, speed and toughness could make him an ideal fit for a team in today’s pass-heavy NFL.

The first round began and ended with selections from the Bulldogs’ defense and included three of their teammates in between, breaking the record of four set by Miami in 2004 and matched by Florida State in 2006.

Plus, edge rusher Jermaine Johnson, who transferred from Georgia to Florida State for his final season last year, went 26th to the New York Jets.

The spotlight in Round 2 on Friday night will be on Dean and Liberty’s Malik Willis, considered the passer with the most upside in this year’s otherwise thin crop of college quarterbacks.

For the first time since 2013, when Buffalo drafted E.J. Manuel with the 16th pick, only one quarterback was drafted in the first round Thursday night.

The Steelers, who lost Ben Roethlisberger to retirement this offseason, selected Pitt’s Kenny Pickett with the 20th overall pick, meaning all he’ll have to do is move to the other side of the teams’ shared practice facility.

Other QBs who could go in Rounds 2 or 3 Friday night include Cincinnati’s Desmond Ridder and Matt Corral of Mississippi.

No running backs were selected in Round 1, and the highest regarded prospect on the board is Iowa State’s Breece Hall, who scored 56 touchdowns for the Cyclones, including five of at least 70 yards.

Among the best available players in Day 2 regardless of position is former Colorado State star Trey McBride, the Mackey Award winner as the nation’s top tight end. McBride credits his two moms — Kate McBride and her partner Jen — for his nurtured upbringing that allowed him to reach the cusp of his dream to play in the NFL.

“He’s an easy one to like,” NFL Network draft analyst Daniel Jeremiah said. “He’s going to be a solid starter for a long time.”

Other prospects to keep an eye on Friday night include Central Michigan tackle Bernhard Raimann, a native of Austria who only switched from tight end two years ago, and pass rushers Boye Mafe of Minnesota and Arnold Ebiketie of Penn State.

The NFL draft kicked off in Las Vegas and featured a whopping nine trades. Two more prominent wide receivers switched teams with Tennessee’s A.J. Brown and Baltimore’s Marquise Brown getting swapped during a dizzying stretch of the NFL draft.

The Ravens traded Marquise Brown and the 100th overall pick to Arizona for the 23rd pick in the draft. Then the Titans dealt A.J. Brown to Philadelphia for the 18th and 101st picks.

The Browns were the latest big-name receivers to move this offseason, following Green Bay’s trade of Davante Adams to Las Vegas and Kansas City’s deal that sent Tyreek Hill to Miami.

The first round featured a record-tying six receivers selected, all in the first 18 selections, beginning with USC’s Drake London to Atlanta with the eighth overall pick.

Two small-school prospects are Skyy Moore of Western Michigan and Christian Watson of North Dakota State, who shined at the Senior Bowl. 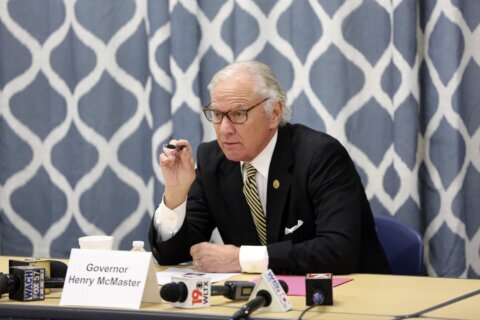