TOPEKA, Kan. (AP) — Hundreds of people opposed to COVID-19 vaccine mandates rallied Saturday at the Kansas Statehouse and pushed state lawmakers to quickly counter them, while an international labor union disavowed a local leader’s comparison of the mandates to the Holocaust that killed millions of Jews.

The rally kicked off ahead of a rare weekend legislative committee hearing on mandates from President Joe Biden that affect as many as 100 million Americans. The hearing gave dozens of mandate opponents a chance to vent their frustration and anger both with the Democratic president’s administration and Democratic Gov. Laura Kelly’s handling of the coronavirus pandemic.

Many of the speakers during the committee’s hearing argued that lawmakers should call themselves into special session instead of waiting to reconvene until 2022. Lawmakers can do that without Kelly if two-thirds of them sign a petition, but so far such an effort hasn’t gained much traction.

“If we allow this to continue, there will be no stopping further government overreach,” said Cody Foster, a utility line worker and volunteer firefighter in central Kansas.

His comments followed Friday’s comparison of the mandates to the Holocaust by Cornell Beard, president of the Wichita district of the International Association of Machinists and Aerospace Workers. A committee member, Republican Rep. Brenda Landwehr, of Wichita, appeared to agree with the analogy.

The international union issued a statement Saturday saying it “strongly condemns the offensive and inappropriate comparison” to the Holocaust.

“Regardless of one’s views on divisive political issues, there is never a place for this type of hurtful rhetoric,” the statement said.

The legislative panel’s name — the joint Committee on Government Overreach and the Impact of COVID-19 Mandates — signals that Republicans in the GOP-controlled Legislature already have concluded that the mandates violate people’s liberties. But many are not yet sure what power the state has to resist.

The committee is supposed to recommend steps for the Legislature to take. In hearings that began Friday, almost everyone testifying strongly opposed vaccine mandates, with some repeating misinformation about vaccine safety.

But with many speakers calling for lawmakers to have a special session, the Senate’s top Republican leaders didn’t rule it out.

“I’m going to look for that kernel of something we can do and see if there’s a window there,” said Senate President Ty Masterson, a Wichita-area Republican.

More than 80 people spoke to the committee Saturday, and only one supported the vaccine mandates, Sheila Sonnenschein, a Kansas City-area resident. She attended the hearing with her psychiatrist-husband Ken and said later, “It really hits my heart when I hear these lies and conspiracy theories.”

Sonnenschein told the committee: “As a Jewish person, it offends me — I mean, I can’t even say it — it’s so upsetting to hear people compare having the vaccine mandates and the mask mandates to the Holocaust.”

Saturday’s hearing came after state Attorney General Derek Schmidt, a Republican hoping to unseat Kelly next year, announced that he has brought Kansas into a federal lawsuit against Biden’s vaccine mandate for employees of government contractors.

The Biden administration is also requiring vaccinations for all federal workers and certain health care workers. Private employers with 100 or more workers will have to require them to be vaccinated or tested weekly.

“The war at hand is the well-being of our nation, the soul of our nation,” Republican state Sen. Mark Steffen, a Hutchinson anesthesiologist and pain-management doctor who’s promoted discredited COVID-19 conspiracy theories and dubious treatments, said at the start of Saturday’s hearing.

Republican activists and consultants across the country contend that opposition to vaccine mandates could create a movement akin to the tea party movement.

Participants in the Statehouse rally brought Gadsden flags — which say show a coiled snake and say, “Don’t tread on me.” Speakers urged attendees to vote for candidates who oppose vaccine and mask mandates in Tuesday’s local school board elections. 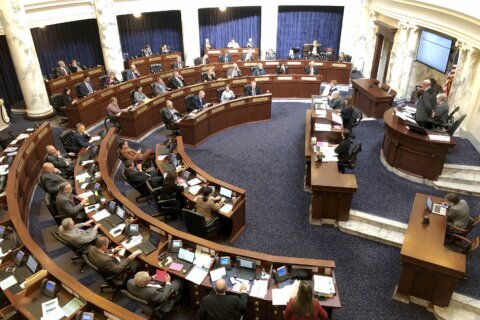