“It makes you feel right at home,” he said.

Westmoreland has made history this week, becoming the first player from the Air Force Academy to qualify for the U.S. Open.

And he’s not just here for the ride.

The broad-shouldered big hitter has shown he has the game to play with the world’s best players, climbing the leaderboard before a triple bogey on the par-4 14th hole knocked him down a few notches.

Westmoreland bounced back nicely, though, and was seven shots behind co-leaders Richard Bland and Russell Henley at 2 over — in good position to become the first person from the Air Force Academy to make the cut at the U.S. Open.

Five years of service did nothing to blunt his game.

Westmoreland’s journey to Torrey Pines is one of the more unique ones in the 156-player field.

A top junior player in Katy, Texas, he had numerous offers to play college golf. He chose to attend Air Force, not exactly known as a golf powerhouse, but a place where he would be pushed and get good coaching.

A professional golf career would have to wait. He had five years of service to finish first.

“The academy seemed hard,” Westmoreland said. “I wanted to challenge myself. I knew I wouldn’t being to play right away, but I hoped it would work out.”

Westmoreland did his best to keep his game sharp while serving.

It was rarely easy.

While stationed in Charleston, South Carolina, he had to juggle his duties as a captain with finding time to practice and play. Weekends allowed time to really grind. Weekdays were a little tougher.

Westmoreland worked all day in finance, got in a workout after, then headed to the driving range at Patriot’s Point Links, where he would hit under the lights until it closed at 10 p.m.

Many of the greens where he served were bumpy, so he would practice on a ruler instead. No wonder he’s hit so many on-line putts on Torrey Pines’ tricky greens this week.

On his way to a deployment in Africa, Westmoreland spent a week in Roda, Spain, where he could only rent one club per day. One day it would be a 6-iron, a 7-iron the next, an 8-iron after that — anything to play and stay sharp.

“He worked hard, he continues to work hard and it’s awesome to see him have some fruits of that labor,” Koury said.

The time in the Air Force served him well.

The unorthodox practice sessions helped him become creative on the course. The rigors of the Air Force made him physically ready when he started as a professional golfer. The discipline made him mentally prepared.

Westmoreland also got an extra, unexpected year of preparation.

He turned professional at the end of 2019 and had some decent finishes on the Mackenzie and Korn Ferry tours, even qualified for two PGA Tour events. Then the pandemic hit, wiping out most of the schedule Westmoreland had planned.

“We waited five (years), we felt like we were having to wait one more, but after a few weeks of feeling sorry for ourselves, we got back to work,” he said.

It was worth the wait.

Westmoreland won a local Open qualifier in Blythewood, South Carolina, with a 69. Then at Dallas Athletic Club, he followed an opening 72 with a 63 to advance to Torrey Pines.

A contingent of about 30 family members, friends and former Air Force Academy players have joined him along the bluffs this week. They let out a roar when he eagled the par-5 ninth hole, groaned as he four-putted the 14th for triple bogey and acted like he won the U.S. Open when he chipped in for par on No. 15.

“That contingent is far more impressive than I am,” he said. “You’ve got fighter pilots, other military personnel — pretty much all of them are military — so they do a lot bigger stuff than me every day. But hopefully we can do well on the weekend and continue to serve on the golf course.”

Westmoreland has succeed after serving.

In a way, the fighter jets over Torrey Pines are a salute to his hard work. 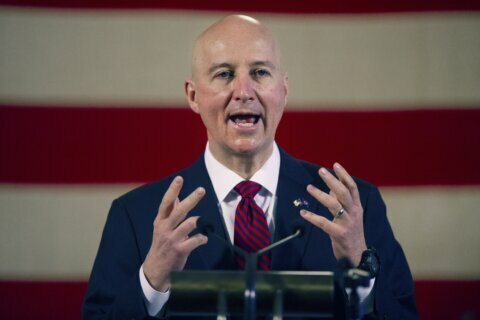