TOPEKA, Kan. (AP) — Democratic Gov. Laura Kelly on Thursday vetoed a Republican measure that would have made Kansas the latest state with a GOP-controlled legislature to ban transgender athletes from girls’ and women’s school sports.

Kelly’s action was widely expected because she had labeled the bill “regressive” and said it would hurt the state’s ability to recruit businesses. Conservative Republican lawmakers did not have the two-thirds majorities necessary in both chambers to override a veto when they pushed it to passage earlier this month.

Kansas is among more than 20 states that have considered such a ban this year, pushing back against an executive order from Democratic President Joe Biden aimed at preventing discrimination against transgender students. Idaho enacted such a ban last year, and Republican governors in Arkansas, Mississippi and Tennessee have signed measures this year.

Sen. Roger Marshall, a Kansas Republican, has been vocal in supporting legislation in Congress. Supporters of such bans argue that that they ensure fair competition for “biological” girls and women and preserve decades of hard-won opportunities for them, including college athletic scholarships.

Kelly’s veto is likely to be an issue in her race for reelection in 2022. Both of her main GOP rivals, state Attorney General Derek Schmidt and former Gov. Jeff Colyer, said earlier this week that they would have signed the measure.

Supporters of the bill still could try to override her veto and try to persuade a handful of moderate Republicans who either voted against the bill or abstained to switch. Supporters needed to pick up only one more vote in the Senate but were eight short in the House. No Democrat voted for it.

Across the U.S., backers of such measures across the U.S. have pointed to the 15 championships won between 2017 and 2019 by two transgender high school runners in Connecticut, which prompted a federal lawsuit. They contend that “biological boys” have innate physical advantages in girls’ and women’s sports that would ruin competition.

In Kansas, they’ve also argued that failing to enact such a ban represents discrimination against women and girls.

Supporters of such bans generally have been unable to cite local examples of problems. The association overseeing extracurricular activities in Kansas K-12 schools says it has been notified of only five active transgender participants in extracurricular activities, and there is no known case of a transgender athlete having won a Kansas championship.

LGBTQ rights advocates argued that the measure attacked already vulnerable students and it would lead to additional bullying.

Some critics worried that the measure, along with a companion proposal in Republican-controlled Missouri could scuttle a bid by Kansas City to host 2026 World Cup soccer games. Also, the NCAA’s Board of Governors earlier this month issued a statement in support of transgender athletes that raised the possibility that its championship games could be moved from states with such bans. 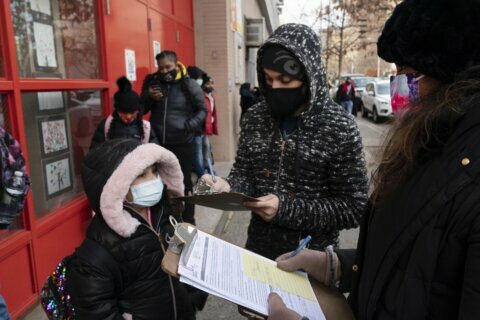