Review: A pre-WWII thriller in ‘Six Minutes to Midnight’

In the years before World War II, the Augusta-Victoria College, a girls’ boarding school in Bexhill-on-Sea, catered to a very specific audience: The daughters and goddaughters of important Germans and high ranking Nazi officials. It is believed that the intent of the school was to educate the girls in the language and British customs and was part of a strategy to keep England and Germany close. Patches on their uniforms displayed a union jack and a swastika.

It’s this patch that caught the eye of Eddie Izzard years ago at a local museum. Izzard is also a product of Bexhill, although she was born in the 1960s. But the idea of this school and this seemingly underwritten chapter in history was intriguing enough to set her on a yearslong journey researching the peculiar institution that operated in plain sight when anti-German sentiment was quite high. The result is “ Six Minutes to Midnight, ” a decent thriller that dials up the excitement around the Augusta-Victoria College with invented murders, intrigue, cops, spies and a secret plot to get the girls out of England before the war breaks out.

Izzard, who co-wrote the script with Celyn Jones (who also acts in the film) and director Andy Goddard, plays the part of Thomas Miller, who comes to the school to interview for a position after the previous teacher, Mr. Wheatley (Nigel Lindsay), disappears. The headmistress, Miss Rocholl (Judi Dench) is a little wary of Miller’s journeyman resume but gives him a shot after she learns that his father was German and he speaks the language. He quickly endears himself to most of the girls but also starts noticing more and more oddities about the propaganda-y instruction of the school’s German instructor Ilse (Carla Juri) — who listens to Nazi broadcasts and leads “sieg heil” chants.

Miller, we discover, has an agenda as well. He’s working alongside the British Secret Service to investigate the school and Wheatley’s disappearance. Things get more urgent when Wheatley’s body washes up on the shore and, later, Miller overhears a plan to evacuate the girls in the middle of the night and send them back to Germany.

“Six Minutes to Midnight” is entertaining enough if a little underwhelming. It’s handsomely and nostalgically shot in a colorful seaside locale, which shouldn’t be surprising considering Goddard also has “Downton Abbey” credits to his name. It follows the script (and cliches) for a classical spy thriller. And it has likable actors throughout: Izzard is empathetic and compelling; Dench gets a proper and respectable role after the “Cats” and “Artemis Fowl” disasters; James D’Arcy eats up his scenes as an arrogant cop; and Jim Broadbent adds a bit of life and joy as an affable bus driver.

But the film is also rather rushed and seems disinterested in the details of its own story. Rarely do you ever wish for something to be longer, but “Six Minutes to Midnight” probably would have benefitted from 30 extra minutes of character development and scene setting. The film doesn’t leave any breathing room to get to know or care about the teenage girls at the center of everything or get a sense of what it was like to be a German teen in Sussex in 1939. We don’t know what they feel about things: Their heritage, their parents, Ilse (another vague mystery) or the impending war. It makes it hard to feel much of anything for them or their fate by the climax.

Perhaps Izzard was simply wary of falling victim to her own jokes about quiet and subtle British films and wanted to get right to the action. “Six Minutes to Midnight,” for better or worse, is definitely something you can eat popcorn to.

“Six Minutes to Midnight,” an IFC Films release in theaters Friday, is rated PG-13 by the Motion Picture Association of America for “some violence.” Running time: 102 minutes. Two and a half stars out of four. 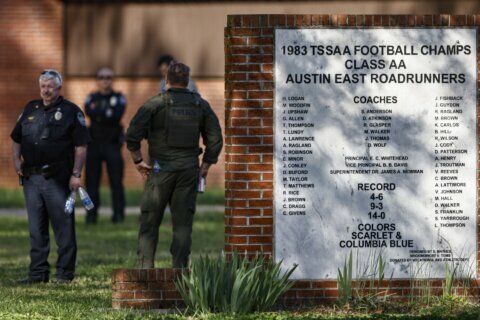