Plan to rename many San Francisco schools is put on hold

SAN FRANCISCO (AP) — The head of the San Francisco school board has put on hold controversial plans to rename 44 schools until students are back on campus after months of virtual learning during the coronavirus pandemic.

Board of Education President Gabriela López announced the decision in Monday’s editions of the San Francisco Chronicle and on SFChronicle.com on Sunday, the newspaper reported.

“There have been many distracting public debates as we’ve been working to reopen our schools,” López wrote. “School renaming has been one of them. It was a process begun in 2018 with a timeline that didn’t anticipate a pandemic. I acknowledge and take responsibility that mistakes were made in the renaming process.”

The board’s 6-1 vote in late January to remove the names of Abraham Lincoln, George Washington from schools along with other prominent figures triggered debate on whether it took the national reckoning on America’s racist past too far.

A few days later, the city of San Francisco sued the San Francisco Unified School District and the board to force the reopening of schools to students. San Francisco teachers, like those in many big districts, are resisting a return to classrooms until they are vaccinated.

Since then, the issue of returning students to in-person learning has loomed ever larger as COVID-19 infection and hospitalization trends have greatly improved in California.

López said reopening will be the “only focus” until children are back in school and that renaming committee meetings are being canceled for the time being.

She also said the there will be a “more deliberative process” in the future, including engaging historians from nearby universities.

“We recognize we need to slow down,” she wrote. “And we need to provide more opportunities for community input. We are working with educators at all levels to involve and educate our school communities about the renaming process. We are realizing, especially now, it will take time and energy to get that right.”

The board’s January resolution called for removing names that honored historical figures with direct or broad ties to slavery, oppression, racism or the “subjugation” of human beings.

The name of California Sen. Diane Feinstein, whose star has faded among some liberals, also would be removed from an elementary school under the plan. 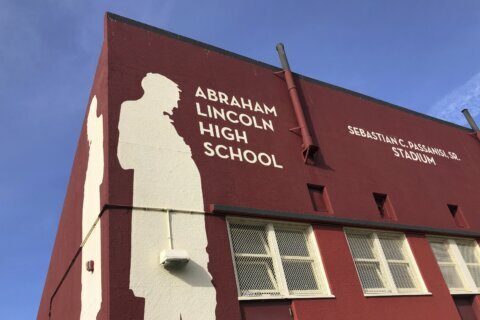