Meet the Black cowgirl who inspires children to read

Caitlin Gooch, the founder of Saddle Up and Read (SUAR), literally saddles up onto one of her family's horses and visits elementary schools, libraries and youth groups to encourage them to read.
Listen now to WTOP News WTOP.com | Alexa | Google Home | WTOP App | 103.5 FM

The only thing better than receiving a book is getting one delivered by a horse.

Caitlin Gooch, the founder of Saddle Up and Read (SUAR), literally saddles up onto one of her family’s horses and visits elementary schools, libraries and youth groups to encourage them to read. The nonprofit in Wendell, North Carolina, also organizes book drives and school-wide reading competitions.

Gooch, 28, says she was inspired by the state’s abysmal child literacy rates.

“This means the world to me because nobody has been looking, nobody was really looking at the literacy rates,” Gooch, a mother to three girls, told CNN. “And that’s why I’m doing it. It’s low, and children are not reading at grade level.”

Only 36% of fourth-graders in the state read at a proficient or higher level, according to last year’s Nation’s Report Card.

“Horses are non-judgmental,” Gooch said. “They don’t snap at you, they don’t undermine any of your thoughts.”

For some students, reading results don’t improve as they grow older.

A 2014 CNN investigation found that some college athletes in the University of North Carolina’s basketball and football programs read at the same level as fifth-graders. Some couldn’t read at all.

SUAR is definitely getting people’s attention.

When Gooch shared her organization’s story on Twitter, it reached over 70,000 likes and almost 30,000 retweets in a week. She even got a shout out from Oprah Winfrey.

“Now that it’s sort of, all eyes on me, there’s definitely an opportunity to do something more,” Gooch said.

She’s been around horses all her life

Gooch was riding horses by age 3.

Along with two of her five siblings, Gooch grew up on a family farm owned by her father, Donal Gooch.

Although he worked as a used car salesman, he built a race track on their 87-acre farm, where he hosted races. He also boarded other people’s horses. Gooch says she grew up around 80 horses.

“When I was younger, I didn’t really notice how different the way I grew up was,” Gooch said. “I didn’t realize that other people didn’t live this way. I’m extremely blessed to have grown up with horses.”

And then the opportunity to show others what they had been missing presented itself to her.

She found a way to help struggling readers

In 2017, Gooch, who had been working at daycare centers and youth groups, noticed that some of the younger children struggled to read. She decided to collaborate with a local library: Any student who checked out more than three books would be entered into a raffle. Five names would be selected out of the raffle and each received a trip to visit the horses on the Gooch family farm.

It was a hit. Gooch expanded her services by creating her nonprofit.

She says she’s raised over $20,000 from supporters across the world who want to help fund an equestrian facility and in-house library for SUAR.

The pandemic hasn’t slowed her down

Although Gooch, along with her husband and three kids, is now based in Chesapeake, Virginia, she still commutes a couple hours every weekend to continue to do her work in Wendell.

Even with the pandemic, SUAR is collecting toys and books for kids this holiday season.

“Right now, because of how things are with the pandemic, we can’t bring people to the farm,” Gooch said. “But at least I can make sure that they get the books that they need.”

And while the pandemic may have slowed things down, Gooch isn’t stopping anytime soon.

“I do this every single day,” Gooch said. “It’s my entire life.”

Gooch isn’t just encouraging children to read more. She’s also showing them that horseback riders can look like her.

“It feels amazing to be that kind of representation,” Gooch said. “And I’m happy to share these experiences.”

And Gooch is already sharing her love of horseback riding with the rest of her family.

Although her husband, Jaquan Salaam, who is in the Navy, has only been on a horse once in his life, she says that he is “incredibly supportive” of the work she does.

Her daughters have all visited the family farm and been on horses. And her middle child says she wants to grow up to be just like mom. 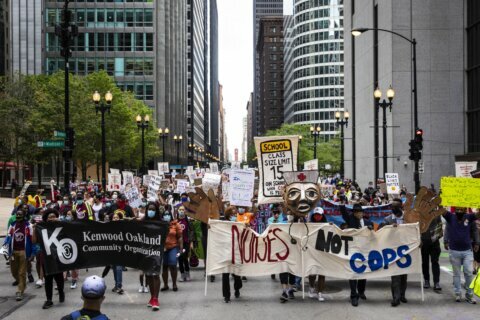 Caitlin Gooch | Saddle Up and Read