INDIANAPOLIS (AP) — The Rev. John Jenkins, the president of the University of Notre Dame, has ended his quarantine after testing positive for the coronavirus less than a week following his attendance at a White House event without wearing a mask.

Jenkins “is symptom-free and looks forward to resuming his normal activities,” the university announced Monday evening. He began his self-isolation period Sept. 28, two days after he attended the Rose Garden ceremony for Amy Coney Barrett, a judge and Notre Dame law professor who is President Donald Trump’s nominee for U.S. Supreme Court justice.

“Father Jenkins again thanked the many people who offered prayers and well wishes for him over the last two weeks,” university spokesperson Paul J. Browne said in a statement Monday.

Jenkins said he was tested after finding out a colleague with whom he has been in regular contact tested positive for COVID-19. The university announced his COVID-19 diagnosis Oct. 2.

During his quarantine, Jenkins reported that he experienced mild symptoms but continued to work from home.

Dr. Mark Fox, deputy health officer for St. Joseph County, said Jenkins “effectively quarantined himself” after returning to South Bend. At that point, however, health officials were not aware that the university president had any high-risk exposures.

“Because of the publicity, and not being in a mask, he chose to quarantine himself,” Fox said. “He didn’t go into the office, and he worked remotely. He was tested later in the week, according to the university protocol, and that’s when he was identified as positive and contact tracing began.”

Several Notre Dame law faculty and administrators joined Jenkins at the White House, though Fox said the county health department has “no indication” that any of those individuals have tested positive for COVID-19 since returning to South Bend.

Some students have criticized the Notre Dame president’s return to campus after pictures from the Rose Garden ceremony showed him without a mask, shaking hands and sitting shoulder-to-shoulder with others at the event.

Jenkins has since apologized, writing in a Sept. 28 letter to the Notre Dame campus that he “regret(s) my error of judgment in not wearing a mask during the ceremony and by shaking hands with a number of people in the Rose Garden.” He continued, “I failed to lead by example, at a time when I’ve asked everyone else in the Notre Dame community to do so.”

Notre Dame, which has about 12,000 students, paused in-person classes Aug. 18 and moved them online amid a surge that saw as many as 89 new cases a day. In-person classes resumed weeks later after a sharp decrease in infections. 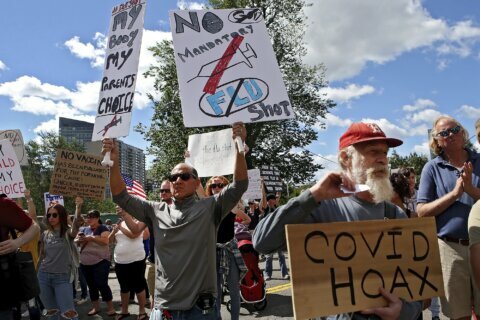