IOWA CITY, Iowa (AP) — A national conservative group may challenge the outcome of the Nov. 3 elections by arguing that municipalities are improperly using hundreds of millions of dollars in private money to administer the polls, a lawyer for the group said Tuesday.

Attorney Erick Kaardal argued during a court hearing in Iowa that local officials have impermissibly accepted grants from the Center for Tech and Civic Life to help pay for election staffing, training, equipment and other expenses.

Kaardal is an attorney for the Amistad Project of the Thomas More Society, a conservative group that is representing plaintiffs in lawsuits seeking to block municipalities in several states from using the grants.

On Tuesday, federal judges in Iowa and Texas rejected the group’s arguments, joining courts in Minnesota, Wisconsin and Michigan that have done the same in recent days. Similar lawsuits are pending in Pennsylvania, South Carolina and Georgia, a group spokesman said.

In Texas, District Judge Amos Mazzant denied the group’s request for a temporary restraining order to block four counties, including Harris and Dallas, from using the election grants. He said the group will not be injured if more people vote because of the private election funding.

“That is not a harm. That is democracy,” he wrote.

In Iowa, U.S. District Judge Leonard Strand rejected a request to block two counties from using the grants, saying it “has not demonstrated any chance of prevailing on the merits.” By contrast, he said blocking the funding would hinder the counties’ ability to run the election and undermine voting rights.

Still, the lawsuits could set the stage for long-shot post-election litigation for conservatives seeking to challenge the outcome.

The Thomas More Society argues that the grants, which were funded through a $300 million donation from Facebook founder Mark Zuckerberg and his wife, Priscilla Chan, would disproportionately favor progressives, even though they have been made available to all municipalities nationwide.

The Center for Tech and Civic Life describes itself as a non-partisan organization backed by Democrats, Republicans and independents. It says more than 2,100 election administrators have applied for the grants.

“We are confident that these frivolous charges are without merit, and look forward to continuing this critical grant program in these unprecedented times,” the Chicago-based group said in a statement.

U.S. District Judge Paul Maloney in Michigan on Monday rejected the allegation that the center targets progressive areas, saying its grants are going to municipalities of all political majorities. He rejected a request to block the cities of Lansing and Flint from using the grants.

Kaardal argued Tuesday in Iowa that running federal elections is “a core governmental responsibility” that needs to be exclusively publicly funded. He argued that accepting private money for that purpose was not authorized by federal law.

Kaardal said his group might press the argument even after the election by asking federal courts to rule that election officials acted improperly by taking the funds.

If a federal court agreed, the group would present the ruling to state canvassing boards and Congress to argue that the election was tainted and that a new special election should be ordered, he said.

The group’s lawsuit in Iowa challenges only the grants accepted by Black Hawk and Scott counties, even though 64 of the state’s 99 counties have received them. Kaardal said some of the plaintiffs live in those counties, and that the group may challenge other counties later.

A lawyer for Black Hawk County, Katie Graham, said there was “nothing illegal or improper” about accepting the grants, which will make voting safer for everyone.

There’s no evidence that the grants were targeted for partisan gain, she said, noting that many Republican-leaning counties received them. Black Hawk County is using the grant to provide hazard pay for poll workers.

Graham had urged Strand to reject the plaintiffs’ request for a temporary restraining order blocking the use of the money. She said the claim it would disenfranchise conservatives was a “novel argument” based on speculation. 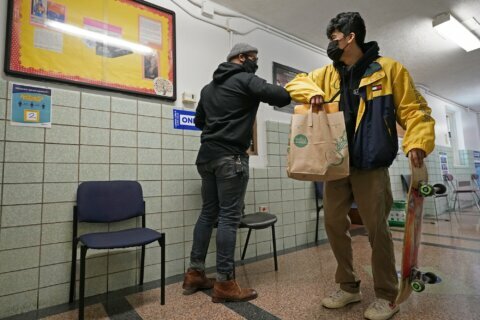