ALBUQUERQUE, N.M. (AP) — The American Civil Liberties Union of New Mexico on Wednesday sued the state’s largest school district and a former teacher over a 2018 incident where the teacher allegedly cut a Native American student’s hair during class on Halloween and asked another student if she was dressed as a “bloody Indian.”

The ACLU’s complaint against Albuquerque Public Schools and the former teacher, Mary Jane Eastin, contends she created a hostile learning environment and discriminated against McKenzie Johnson, who is Navajo. The group also claims the school district failed to properly train teachers and provide for student safety.

The lawsuit follows discrimination charges filed in May 2019 with the New Mexico Human Rights Bureau by Johnson. The school district denied the allegations and the bureau did not reach a determination, clearing the way for the lawsuit.

The case is aimed at establishing a clear precedent that New Mexico’s anti-discrimination protections extend to students in public schools, said Preston Sanchez, an attorney at the ACLU of New Mexico. It also seeks unspecified financial damages.

“Not only must we ensure Native American students feel safe behind school walls, but we must also do everything in our power to ensure that they are treated with the dignity and respect they deserve,” Sanchez said.

School officials declined to comment on the case. Eastin has an unlisted phone number and it wasn’t immediately clear if she had an attorney.

The school district’s superintendent issued a public apology after the allegations emerged and told parents that Eastin would not return to Cibola High School, where she taught English.

School officials said later that Eastin’s employment with the school district ended in 2018 but did not disclose if she quit or was fired. They also saidthey would address racism and cultural sensitivity at all schools in the district.

Leaders from the Navajo Nation had called on the district to provide cultural sensitivity training. While they described the teacher’s acts as part of a “Halloween stunt,” they said one teen’s parents told them it was traumatizing.

According to the lawsuit, Eastin had dressed up as a voodoo witch on Halloween and planned a game for her advanced English class in which she asked students questions and then rewarded those who answered correctly with marshmallows and gave dog food to those who answered incorrectly.

The lawsuit states that at one point, Eastin approached a Native American student and asked her if she liked her braids and then allegedly cut the tip of the girl’s hair with scissors.

Eastin also was accused of then asking another student, identified as Johnson, if she was dressed as a “bloody Indian.” The girl’s mother later told reporters her daughter was dressed for Halloween as Little Red Riding Hood with a red paw mark on her face.

The ACLU contends in the complaint that Johnson’s reputation was harmed and that she suffered personal injuries, including emotional distress.

Johnson has since recounted her story during school board meetings and at a Native American community forum hosted by the school district. She has said more needs to be done to address cultural sensitivity in Albuquerque’s schools. 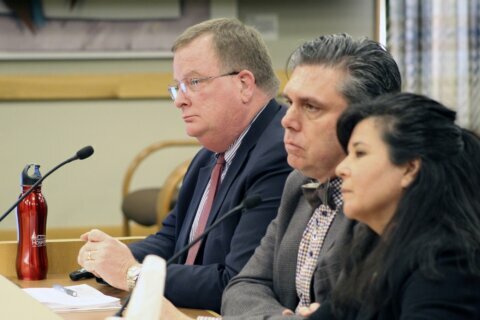 Free University of New Mexico tuition for some students