MEMPHIS, Tenn. (AP) — The U.S. Census Bureau is giving a homework assignment to schoolchildren across the country: Tell your parents to fill out the census form. Your school’s funding depends on it.

Hundreds of mostly minority students from Shelby County Schools in Memphis, Tennessee, gathered at Liberty Bowl Memorial Stadium and participated in activities teaching them the importance of the census and convincing them to tell their parents or caregivers that filling out the form will determine how much money their schools will get from the government for computers, after-school activities, meals and other resources.

Counting some 330 million people is the largest peacetime operation undertaken by the federal government. The Census Bureau hires a half-million workers, opens about 250 offices and mails out a multitude of forms in English and 12 other languages to more than 130 million households. In 2020, for the first time, the Census Bureau is relying on most respondents answering questions via the internet, using their computer, tablet or smartphone.

The bureau says census data will shape how $675 billion in federal funding is distributed annually. The Statistics in Schools program offers educators online activities, games and other resources to help them bring statistics to their classrooms and increase interest in the census count.

“Who wants to give your teachers homework?” Dillingham asked the crowd.

“The homework assignment is to fill out the 2020 census. We need to count everyone living in their homes, including your homes,” he said.

As part of the Statistics in Schools program, officials will be providing kid-friendly census data for teachers to use in classrooms, such as how many ice cream parlors or amusements parks are in their community, said Victoria Glasier, who heads the program.

Students will get a letter, provided in 13 languages, to take home to their parents that explains the census, Glasier said.

Superintendents also will receive information about the census and schools will get wall maps with census data to spread the word.

“This audience has their parents’ ears, so if they learn about that data and they get excited about something, they take that message home,” Glasier said. “We work with teachers to create our activities, and some of them were not aware that the funding that comes to their classrooms is based on this.”

Shelby County Schools is Tennessee’s largest school system, with more than 100,000 students and a $1.4 billion budget.

Audio-visual production teacher Stan Bell wants parents to participate so that he can get more computers, cameras and other technology in his classroom.

Bell, who is black, also hopes the program will encourage minorities to fill out the form by stressing how important the census is. Leaders of some minority groups worry that the reliance on the internet risks undercounting people less likely to be online: low-income households, immigrants and elderly and rural residents.

“There’s a sense of inhibition because they don’t really know what they are signing off on or what they are getting into, or are they exposing too much, or if they’re supposed to do this,” Bell said. “Everybody counts.” 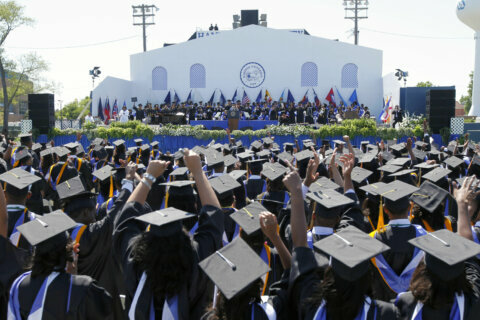