FULLERTON, Calif. (AP) — A man arrested in the stabbing death of a retired administrator at the California State University,…

FULLERTON, Calif. (AP) — A man arrested in the stabbing death of a retired administrator at the California State University, Fullerton campus was a co-worker, police said Thursday.

Chuyen Vo, 51, was arrested Wednesday night at his home in Huntington Beach, officials announced at a news conference near the killing scene in a campus parking lot.

Lt. Jon Radus, however, declined to elaborate on Vo’s work relationship with the victim and whether it was current or in the past.

Police also didn’t reveal a motive for the killing.

The victim, Steven Shek Keung Chan, 57, worked as the director of budget and finance and student services for university extended education but retired in 2017. He returned to the campus in January to work as a consultant.

Authorities have said Chan was found stabbed numerous times inside his silver Infiniti on Monday.

A black-clad man was seen running away and later leaving a nearby parking lot in a black sedan.

The school had no reports of any problems between Chan and Vo, university spokeswoman Ellen Treanor said.

Vo, whom neighbors said they knew as Chris, lived in an Orange County neighborhood lined with two-story homes near a busy freeway with his wife, mother-in-law and children, neighbor Michael Wood said.

Besides his college job, Vo sold life insurance and annuities, which had had him traveling frequently, Wood said.

“It comes to me as a shock that he’s the one suspected of this crime,” Wood said.

No one answered the door at the home listed to Vo.

Neighbor Gloria Venlet said she knew Vo worked as an administrator at the Fullerton campus and drove a black BMW with tinted windows. When she read about the campus stabbing in the newspaper earlier in the week and that police were looking for a similarly described vehicle, she said she paused for a moment.

However, Venlet said she couldn’t imagine any involvement by Vo, who always wore a smile.

“I was considering making a call (to police) but thought, no, no, no, there’s no way that would be him,” she said.

Chan, of Hacienda Heights, had an undergraduate degree in accounting and a law degree and previously worked as an auditor for the California State University system. His family asked for privacy earlier this week, and Treanor said co-workers said they couldn’t fathom why someone would want to harm a man of few words known for his dry sense of humor and enormous patience.

Cal State Fullerton is a nearly 40,000-student commuter school in the middle of its host city in Orange County and has the largest enrollment in the 23-campus California State University system. 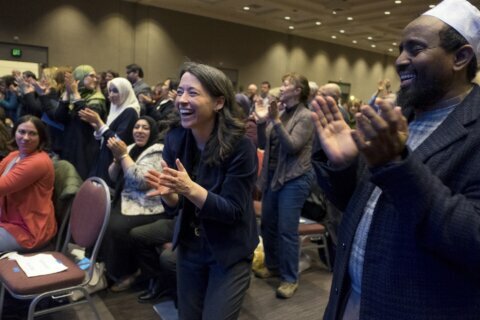