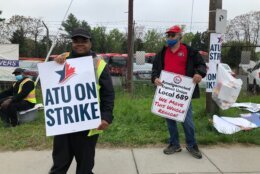 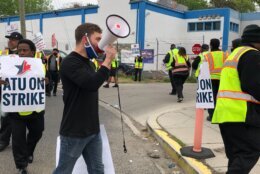 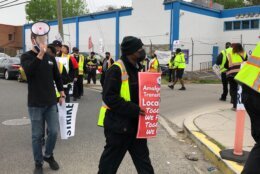 D.C. transportation officials are warning commuters that Circulator service could be disrupted as bus drivers go on strike Tuesday.

Striking DC Circulator bus drivers were on a picket line early Tuesday on the first day of their strike, which comes amid a breakdown in negotiations over wages and benefits.

DDOT is offering Metrobus alternatives for all six routes to avoid travel delays.

ATU Local 689 President Raymond Jackson told WTOP that drivers are out there for the long haul.

“We’re going to be out here as long as it takes,” Jackson said.

Drivers should be getting hazard pay for their work, he said, and the pandemic made it clear that they were essential.

Bus driver Gary Stoddard said they aren’t getting paid enough for the work that they do.

Bus driver Tywan Robinson said that the time has come that they needed to make a statement.

“We work hard for this. We work real hard — 10, 11, 12 hours a day — and we’re tired,” Robinson said. “We had to work under conditions where some people don’t want to wear masks and people getting sick. We take this home to our families, which is unfair.”

This morning, @ATULocal689-Washington, DC bus operators working for the DC Circulator went on strike against contractor RATP Dev in their fight for fair and just contract. Local President Raymond Jackson and our members are standing strong and united on the picket lines. #1u pic.twitter.com/eUy8OCap70

The picket line included supporters of the cause, in addition to the drivers.

On the picket line in support of @ATULocal689 @DCCirculator drivers on strike. @DDOTDC needs to do right by its workers. pic.twitter.com/08uibqR7Tg

The driver’s union said that it is “fed up” with the lack of progress in contract talks with RATP Dev, which manages the Circulator. It accuses the company of unfair labor practices.

“RATP Dev left us with no other options but to walk off the job at the DC Circulator,” Jackson said.

The union said that after months of negotiations, RATP Dev has been “negotiating in bad faith,” threatening to substitute union members with subcontractors, eliminating the worker’s federal rights under the Family & Medical Leave Act, and undermining progressive discipline. The company also did not adequately address underpayment and inflation, the union said.

“This company will only realize the true value of its workforce when they don’t show up to work,” Jackson said.

The bus drivers will stay out until an agreement is reached.

“It’s time for the company to get back to the table to give these front line bus operators, who have been risking their lives to keep their communities moving since the pandemic began, a contract that treats them like the heroes they are.” ATU International President John Costa said.

RATP Dev, in a statement, said that the decision to strike was disappointing.

“The Company proposed to extend the term of the parties’ current collective bargaining agreement beyond April 30, 2022, but ATU Local 689 rejected the Company’s offer to avoid a strike.”

RATP Dev also said that its current proposal increases a retirement match, adds a medical plan that was requested by the union, makes Juneteenth a holiday and provides better wages.

The bus drivers and the company are scheduled to resume talks on Wednesday.