WASHINGTON (AP) — The Federal Aviation Administration’s failure to notify Capitol Police about a parachute stunt at a nearby baseball stadium led to an alert and urgent evacuation of the U.S. Capitol, a law enforcement official said Thursday. The FAA said it was reviewing the communications breakdown.

The police alert about the plane, which was transporting members of the U.S. Army Golden Knights who later parachuted into Nationals Park for Military Appreciation Night, sent congressional staffers fleeing the Capitol and legislative buildings on Wednesday evening.

A law enforcement official said the FAA did not provide the required notification to the Capitol Police that a plane would be circling overhead, prompting the alert and blaring sirens at the Capitol to evacuate the complex.

The incident was a stunning communications failure, all the more remarkable because of Washington’s focus on improving security since the deadly Jan. 6, 2021, attack on the Capitol by supporters of then-President Donald Trump.

House Speaker Nancy Pelosi, D-Calif., promised a congressional review of the FAA’s “apparent failure,” which she called “outrageous and inexcusable.”

Capitol Police on Thursday called the decision not to alert the force “extremely unusual,” and said officers followed the policies and procedures necessary to ensure the safety of congressional staff.

“The United States Capitol Police must make split-second decisions that could make the difference between life and death,” the Capitol Police statement said. “The decision to evacuate the campus is not one we take lightly.”

In an overnight statement, the FAA said it “takes its role in protecting the national airspace seriously and will conduct a thorough and expeditious review of the events this evening and share updates.” The agency said it knows its actions affect others, “especially in our nation’s capital region, and we must communicate early and often with our law enforcement partners.”

Kelli LeGaspi, a spokeswoman for the U.S. Army Recruiting Command, which was behind the Golden Knights’ pregame demonstration, said in a statement, “We are reviewing all aspects of the event to ensure all procedures were followed appropriately to coordinate both the flight and the parachute demonstration.”

Many people who work on Capitol Hill have remained on edge more than a year after hundreds of pro-Trump rioters pushed their way past overwhelmed police officers, broke through windows and doors and ransacked the Capitol as Congress was voting to certify Joe Biden’s 2020 presidential election win.

In Wednesday’s incident, the aircraft, a twin-engine plane, took off from Joint Base Andrews in Maryland and had been circling inside heavily restricted airspace close to the Capitol when the alert was sent. Radar tracking data shows the plane, a De Havilland Twin Otter, remained clear of the prohibited airspace over the Capitol building and other government complexes at all times. Air traffic control recordings capture the army plane coordinating its flight with the control tower at nearby Ronald Reagan Washington National Airport.

The capital region is defended by several surface-to-air missile sites, as well as military aircrews on round-the-clock alert. It did not appear that any of those systems was scrambled.

Officials believe, based on a preliminary review, the pilot may have not properly reported taking off or had appropriate clearance, the officials familiar with the matter said. They were not authorized to discuss the matter publicly and spoke to the AP on the condition of anonymity.

Pelosi, in a Wednesday evening statement, said, “Congress looks forward to reviewing the results of a thorough after-action review that determines what precisely went wrong today and who at the Federal Aviation Administration will be held accountable for this outrageous and frightening mistake.”

The plane landed back at Andrews around 6:50 p.m. after the parachutists descended into the middle of the field at Nationals Park, a little more than 1 mile (1.61 kilometers) from the U.S. Capitol.

One witness to the chaos at the Capitol was Eireann Dolan, the wife of Nationals pitcher Sean Doolittle. “I was walking the dogs past the Dirksen Senate Office Building,” Dolan tweeted. ”People started streaming out all at once. They told me to turn around and get away as fast as possible. Some people were calm but many were genuinely panicked. I know I was.”

Buildings on the Capitol complex were reopened a little after 8 p.m.

The Washington Nationals lost the game to the Arizona Diamondbacks 11-2. 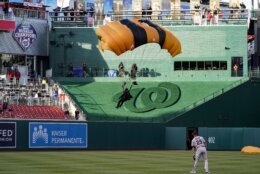 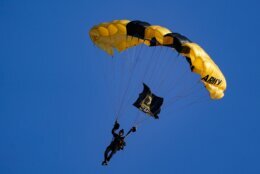 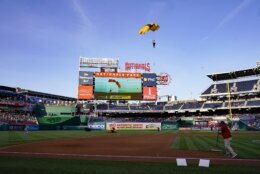 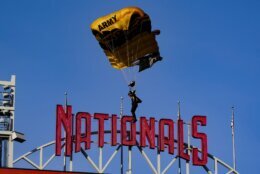 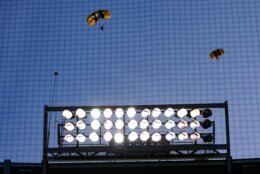 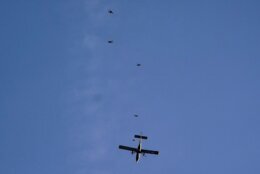 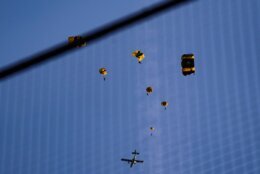