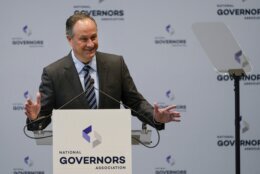 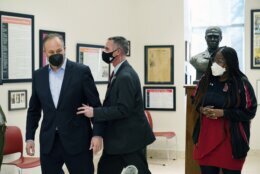 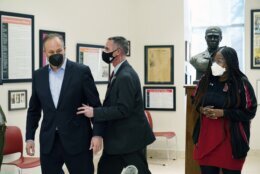 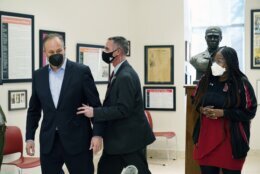 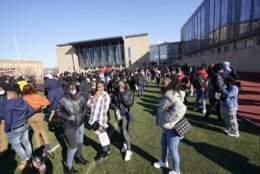 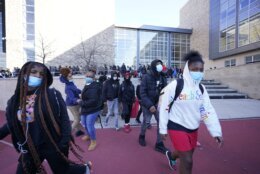 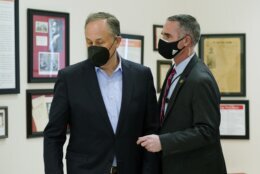 WASHINGTON (AP) — Doug Emhoff, the husband of Vice President Kamala Harris, was whisked out of an event Tuesday at a Washington high school by Secret Service agents following a bomb threat.

Emhoff was at Dunbar High School to help commemorate Black History Month and was in the school’s museum for a few minutes when a member of his security detail approached him saying, “We have to go.” Emhoff was hustled out into his waiting motorcade and whisked away.

An overhead announcement then instructed students and teachers to “evacuate the building.”

District of Columbia Public Schools spokesperson Enrique Gutierrez, who was at Dunbar for Emhoff’s appearance, said there had been a bomb threat.

The U.S. Secret Service said in a statement later Tuesday that “at this time there is no information to indicate the threat was directed toward our protectee,” meaning Emhoff.

“This afternoon, the Metropolitan Police Department (MPD) responded to a bomb threat at Dunbar High School,” Gutierrez said afterward in a formal emailed statement. “All students and visitors were safely evacuated in accordance with DC Public Schools protocols and given the time of the incident, students were then dismissed for the school day.”

Emhoff spokesperson Katie Peters said the school had alerted the Secret Service about what she said was a “security incident or a report of a potential security incident.”

“U.S. Secret Service was made aware of a security threat at a school where the @SecondGentleman was meeting with students and faculty,” Peters added in a later tweet. “Mr. Emhoff is safe and the school has been evacuated. We are grateful to Secret Service and D.C. Police for their work.”

The threat came in a phone call to the front desk announcing there was a bomb inside and giving people 10 minutes to leave, Executive Assistant Police Chief Ashan Benedict said. The information was passed along to the Secret Service, prompting Emhoff to be moved out of the area, he said.

Police used bomb technicians and dogs to search the building and concluded there was no threat, Benedict said. Based on a preliminary investigation, it does not appear that the threat is related to a series of threats made to historically Black colleges in the U.S., Benedict said.

After evacuating the building, students, teachers and other staff gathered outside on the high school football field. Students were sent home since it was close to their regular dismissal time and it would have taken several hours for security officials to clear the building, principal Nadine Smith said.