When Indira Henard, director of the DC Rape Crisis Center, received the text message Wednesday, she thought she wasn’t reading her phone correctly. “Indira oh my god,” said the message from a colleague. “Cosby’s walking out of prison.”

“I put on the news and there it was, and my heart just dropped,” Henard said. “I thought about how all our survivors would be feeling.”

During the afternoon, Henard says the center’s hotline was “off the hook, with survivors needing a place to process, and people asking, ‘What happened? I don’t understand. He got convicted. Why would they do this?’” The center held support sessions Wednesday evening and scheduled emergency sessions Thursday to deal with the news.

When America watched Bill Cosby — once “America’s Dad” — go off to prison nearly three years ago, it was perhaps the most stunning development yet of the nascent #MeToo movement, which had emerged in late 2017 with allegations against Hollywood mogul Harvey Weinstein. Advocates and survivors of sexual assault hoped the movement would usher in an era of accountability for harassers and abusers — and in many ways, it did. Victims have been increasingly emboldened in recent years to seek justice, even for years-ago abuse, hoping their allegations would be taken more seriously.

But on Wednesday, as the nation digested the equally stunning sight of Cosby released from prison, some worried it would have a chilling effect on survivors, who often don’t come forward because they don’t believe it will bring justice. And they wondered whether some of the movement’s momentum, already slowed by the pandemic, would be lost amid the feeling that another powerful man had gotten away with it — albeit on a technicality.

“It’s been a hard day,” Henard said. “It’s a deeply painful moment — not just for survivors in the Cosby case who came forward at great personal risk, but for all survivors.”

This story includes discussion of sexual assault. If you or someone you know needs help, please call the National Sexual Assault Hotline at 1-800-656-4673.

For Tarana Burke, the prominent activist who gave the #MeToo movement its name, the first reaction to the Pennsylvania court’s decision was ”shock, definitely shock.”

“And as the shock settled in and I started seeing some of the (social media) commentary coming in … we, folks who do this work across the field, started huddling together to talk about what our response would be,” Burke said in an interview. “It was just real concern for survivors. We’re going to have a hard time sleeping.”

“The fact of the matter,” added Burke, herself a sexual assault survivor in her youth, “is we won’t see the ramifications of things like this for a while. People will look back and say, ‘I was sexually assaulted a week before the Cosby verdict was overturned. And the way that the backlash hit the Internet made me change my mind.’ We won’t hear those stories for a while. But those of us who have been through similar things — we know exactly how this hits and where it lands and what the consequences are, unfortunately.”

RAINN, the anti-sexual violence organization, said its hotline calls were up 24 percent Wednesday from the previous week. “This is one of those times I really pray people will read beyond the headlines,” said Scott Berkowitz, executive director.

“I think the country believes the victims,” Berkowitz said in an interview. What does worry him: “Many survivors choose not to report to police, and for those who do report it’s a hard decision because they know it’s going to be a long, difficult slog through the justice process. It only makes sense to put yourself through that if you believe that at the end, there’s a reasonable chance of getting justice.” He said RAINN would try to educate people that “the issue that let Bill Cosby out is not an issue that comes up in a normal case.”

That’s the point that Lisa Banks — one of the nation’s most prominent attorneys in #MeToo issues with her partner, Debra Katz — sought to drive home. “The message has to be very clear and simple, that this was a mistake by prosecutors, a very unusual one and a technicality that is unlikely to happen again,” she said.

She was referring to the decision of the Pennsylvania Supreme Court that District Attorney Kevin Steele was obligated to stand by his predecessor’s promise not to charge the comedian, though there was no evidence that agreement was ever put in writing.

“Sure, the optics of the first major conviction of the #MeToo era walking out of prison is devastating,” Banks said. “I don’t think that’s something many people are going to get past very easily. But I will say one thing that (Cosby accuser) Andrea Constand said when the verdict came down: ‘Truth prevails.’ I still think I did. And I don’t want people to get discouraged by this, although I know it’s going to be hard.”

For activist Anita Hill, the word “technicality” wasn’t quite adequate to describe what she sees as a deeply flawed legal system stacked against survivors.

The issue of the non-prosecution agreement was, Hill said in an interview, ”revealing in how hard it is for women to actively prove to prosecutors their claims should be heard in court by a jury.” She also found it troubling that the court had left open the question of whether the prosecution’s use of five additional accusers was improper, as Cosby had argued, “creating this other uncertainty.”

“Uncertainty: that’s the thing that keeps people from coming forward,” said Hill, who famously came forward herself in 1991 with harassment allegations against Clarence Thomas in his Supreme Court confirmation hearing. “They just don’t know what’s going to happen. And you do know it’s going to be really brutal.”

The general public, she said, likely won’t understand the complexities of why it happened: “There was a jury verdict. He was in jail. Now he’s not.”

As for #MeToo: “it’s a work in progress,” said Hill, who now chairs the Hollywood Commission, which combats harassment in the entertainment industry. “Old systems are hard to change — they require a different mindset. So I think we still have to keep pressing. We have the social movement, we have the public outrage. But we need reform of the systems that have been in place forever.”

Henard said she and her colleagues at the DC Rape crisis center were spending Thursday listening to survivors. “I’m really concerned around the chilling effect this will have,” she said. “Particularly for Black and brown survivors, this is cutting deep. We are bearing witness to tears and pain, survivors wondering, ‘What is it going to take for a verdict to sit and not get turned over because of a technicality?’ This man raped not one, not two, not three not four but (dozens of) women, and so we can’t forget that,” she said, referring to accusations against Cosby that never went to court, often because the statute of limitations had run out.

But Henard said Wednesday’s court decision, shocking as it was to so many, “in no way diminishes the good work of the #MeToo movement.”

“We’ve made great strides in the last few years,” she said. “There’s more great things that have happened and will continue to happen. What this moment does is remind all of us, especially those of us who have boots on the ground, that there’s still work to do.” 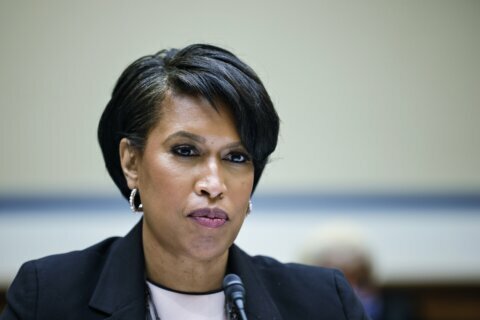