America watched as hordes of rioters stormed the U.S. Capitol on January 6 — crushing through windows, pressing up stairways, and sending lawmakers and law enforcement running for their lives. The flood of protesters who streamed into the Capitol that day left federal authorities with an equally immense task: finding and charging those responsible.

According to a CBS News review of court documents, at least 552 defendants have been charged in connection with the January 6 attack. Six months after the siege, the FBI said they have yet to identify more than 300 individuals believed to have committed violent acts on the Capitol grounds, including over 200 who assaulted police officers.

FBI Director Christopher Wray said late last month, “This is far from over.”

Prosecutors have called the case “unprecedented” in scale, and the government said in a March court filing that the Capitol attack “is likely the most complex investigation ever prosecuted by the Department of Justice.”

As law enforcement continues to round up alleged rioters, here’s what CBS News has learned about those who were arrested:

CBS News has reviewed court documents for 552 defendants’ cases that have been unsealed. Of those, more than 200 defendants were also indicted by grand juries.

For others, plea negotiations have been complicated by the vast amounts of evidence involved in the investigation.

Charges include assaults on officers, destruction of government property and conspiracy

The Justice Department said at least 165 defendants have been charged with assaulting, resisting, or impeding officers or employees, including more than 50 who were charged with using a deadly or dangerous weapon or causing serious bodily injury to an officer.

In total, CBS News has found that more than 150 officers were injured in the attack, according to sources on Capitol Hill and the Capitol Police union, as well as testimony from Metropolitan Police Chief Robert Contee.

Approximately six people have been arrested on charges related to assaulting a member of the media or destroying their equipment on January 6.

Nearly 235 defendants were charged with corruptly obstructing, influencing, or impeding an official proceeding or attempting to do so, and approximately 40 defendants have been charged with conspiracy, a charge that alleges defendants coordinated with others to commit an offense. They include four alleged Three Percenters, 16 Oath Keepers who were indicted together in a single conspiracy case and 15 members or affiliates of the Proud Boys, who were charged in four separate conspiracy cases.

During proceedings for three of the more than 35 defendants charged with the destruction of government property, the government said their crimes amounted to “terrorism” — an allegation that is not itself a charge but could influence prison sentences if they are found guilty.

Dozens of defendants have served in the military

At least 60 of those arrested are current or former military members. Of those, one is an active duty service member, four are current part-time troops in the Army Reserve or National Guard and 53 previously served in the military, according to attorney statements, military service records and court documents obtained by CBS News.

The Army Reserve shared the following statement with CBS News: “The U.S. Army Reserve takes all allegations of Soldier or Army civilian involvement in extremist groups seriously and will address this issue in accordance with Army regulations and the Uniform Code of Military Justice to ensure due process. Extremist ideologies and activities directly oppose our values and beliefs and those who subscribe to extremism have no place in our ranks.” 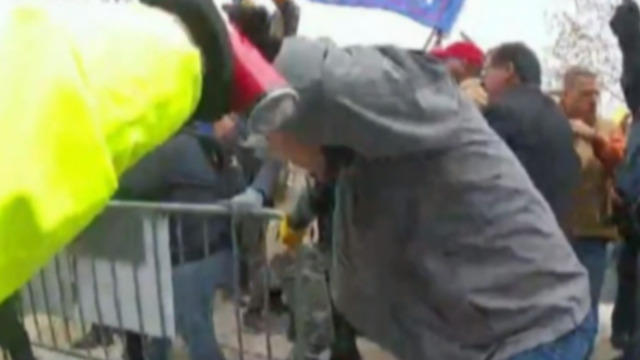 At least 15 of those arrested were either former police officers or were employed as law enforcement officers at the time of the riot, according to court documents and employment records. Prosecutors also charged at least one current firefighter and one retired firefighter.

One off-duty Drug Enforcement Agency agent was accused of carrying his government-issued weapon to the Capitol riot. Prosecutors say he posed for pictures while flashing his DEA badge and climbed onto the Peace Monument to film himself as he delivered a “monologue.” He is no longer employed at the agency.

Of the seven police officers employed at the time of the riot, at least six have since lost their jobs. Kevin Tuck, a police officer with Windermere Police Department in Florida, resigned after the FBI arrested him at his police department. Karol J. Chwiesiuk, a Chicago police officer who was arrested June 11 and accused of entering the Capitol building on January 6, was not fired but has been “relieved of his police powers,” a department spokesperson said. The Board of Supervisors in North Cornwall Township, Pennsylvania, voted June 1 to fire Joseph Fischer, a police officer who had been charged with, among other crimes, obstruction of law enforcement during civil disorder. Houston police officer Tam Dinh Pham and Monmouth County correctional police officer Marissa Suarez both resigned after they were arrested, and two Virginia police officers were fired after prosecutors charged them for their alleged conduct at the Capitol.

Prosecutors have charged at least one former police chief. Alan Hostetter was chief of the La Habra Police Department in California for eight months in 2010, according to the department, and prosecutors have charged him with conspiring to obstruct an official proceeding. Prosecutors have also charged former officers with the New York Police Department: Thomas Webster, who is accused of lunging at a Capitol police officer with a flagpole, and Sara Carpenter, whose arrest, an NYPD spokesperson said, was the culmination of the NYPD’s close work with the FBI Joint Terrorism Taskforce.

Nicholes Lentz — who the Florida Department of Law Enforcement said is a former officer in the North Miami Beach and Fort Pierce police departments — was charged after posting videos from inside the Capitol. In a video, he said, “We’re not here to hurt any cops of course. I love my boys in blue, but this is overwhelming for them.”

Authorities are still looking for hundreds of suspects

The Justice Department said the FBI was still seeking the public’s help to identify more than 300 people believed to have committed violent acts on the Capitol grounds, including over 200 who assaulted police officers.

FBI Director Christopher Wray said in March that citizens from around the country had sent the FBI more than 270,000 digital media tips.

The government said it has issued a combined total of over 900 search warrants and the investigation has included more than 15,000 hours of surveillance and body-worn camera footage from multiple law enforcement agencies. The government has also gathered approximately 1,600 electronic devices, the results of hundreds of searches of electronic communication providers, over 80,000 reports and 93,000 attachments related to law enforcement interviews and other investigative steps, authorities said in a filing.

Defendants have come from at least 46 states

Authorities have linked more than 80 defendants to extremist groups

At least 70 women have been arrested

While those arrested in the January 6 mob were mostly men, at least 70 women have also been arrested for their alleged participation.

Among the 179 defendants whose ages are known, the average age is 41. The youngest-known alleged rioter is 18-year-old Bruno Joseph Cua, whom prosecutors accused of assaulting an officer after he posted online, “President Trump is calling us to FIGHT!”

The oldest is Gary Wickersham, who, according to his attorney, is an 80-year-old Army veteran. Authorities said Wickersham walked through the Capitol during the siege and later told authorities he believed he was authorized to enter because he pays his taxes. 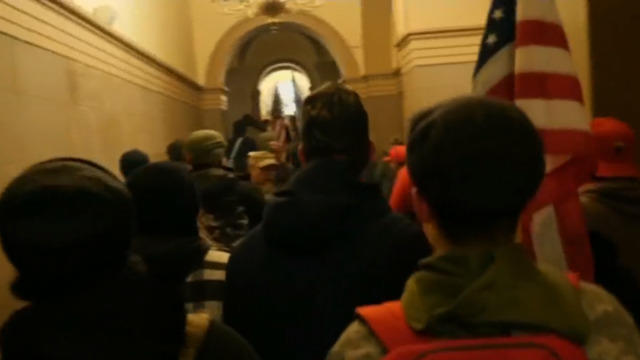 Michael Fanone, a D.C. Metropolitan Police officer, received a vulgar, threatening voicemail while testifying before the House select committee investigating the January 6 assault on the U.S. Capitol, with an unidentified caller saying he wished the mob of rioters who breached the Capitol would have “killed all you scumbags.”

The Justice Department rejected a request by Congressman Mo Brooks, a Republican from Alabama, to defend him in a civil lawsuit filed against him by fellow Congressman Eric Swalwell of California for his role in the January 6 assault on the U.S. Capitol.

The Justice Department decided that former officials who worked in the Trump administration can testify before congressional committees probing the January 6 assault on the U.S. Capitol, a U.S. official confirmed to CBS News.

A 36-year-old Maryland man who live-streamed video of the shooting death of Ashli Babbitt during the U.S. Capitol riot on January 6 pleaded guilty to a misdemeanor for “parading, demonstrating or picketing in a Capitol building.”

An off-duty special agent for the Drug Enforcement Agency carried his government-issued firearm while attending the January 6 riot at the U.S. Capitol, according to court documents. Prosecutors say he posed for pictures while flashing his DEA badge and climbed onto the Peace Monument to film himself as he delivered a “monologue.”

Paulina Smolinski contributed to this report.