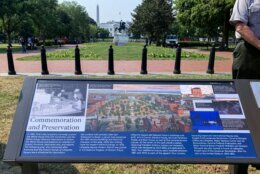 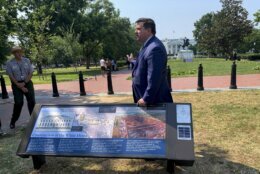 WASHINGTON (AP) — What started as a few public comments from former first lady Michelle Obama has resulted in a new permanent public display in Lafayette Park that details the role of enslaved people in building the White House.

The White House Historical Association on Wednesday unveiled three new historical markers at the northern end of Lafayette Park-—less than a block from the White House.

The three large horizontal tablets have illustrations and text that address different issues. One focuses on the construction of the White House itself, with an emphasis on the fact that both enslaved people and paid laborers took part. The second focuses on former first lady Jacqueline Kennedy, who founded the association in 1961. The third addresses Lafayette Park’s history as a center for public protests, going back to 1917 and continuing through last summer’s protests over police brutality and racial injustice.

The intersection of 16th and H streets in front of the markers was officially named Black Lives Matter Plaza by the city government last year.

Stewart McLaurin, the president of the association, credits Mrs. Obama with unintentionally jump-starting the project. While first lady, she publicly spoke multiple times of her intense awareness that she woke up every morning in a house built by enslaved people.

The use of slave labor in the construction of the White House in the 1790s was common knowledge, but McLaurin said Mrs. Obama’s comments resonated. The response prompted the organization to start seriously studying the issue and raising about $200,000 for what became this project.

“We were inundated with people wanting to know more about that story,” he said. “We knew, but we didn’t know the details and the depths.”

The White House Historical Association is a nonprofit donor-supported group that helps maintain many of the White House’s interior furnishings. It also funds the annual White House Easter Egg Roll.