ATLANTA (AP) — A flight from Atlanta to Washington, D.C., made an unscheduled landing after being struck by birds, a Delta Air Lines spokesman said.

It happened Sunday during takeoff, as Flight 2281 left Hartsfield-Jackson Atlanta International Airport, Delta spokesman Morgan Durrant said. The plane returned to Atlanta and the gate, so that passengers could board another flight to Washington late Sunday night, he said.

WJLA-TV Managing Editor Paul Gourley, who was on the flight, said the plane made an emergency landing after the jet’s cockpit windshield was struck. He posted a picture on Twitter of the bird’s remains on the windshield. In the Twitter post, he congratulated the crew members for their calmness and professionalism in getting the plane back safely.

Wildlife strikes have been on the rise in recent years, partly due to increasing wildlife populations and faster and quieter aircraft, according to the Federal Aviation Administration.

There have been more than 50 wildlife strikes so far this year associated with Atlanta’s airport, the FAA’s Wildlife Strike Database shows. Those that could be identified involved a red-tailed hawk and multiple robins, sparrows and blackbirds. 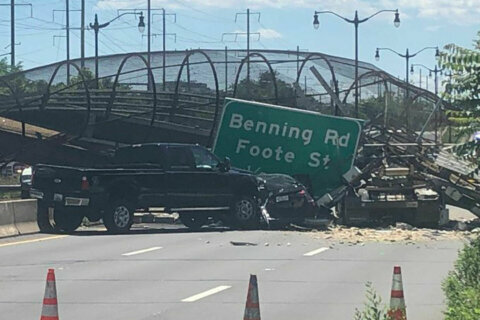