One House panel will vote on advancing a bill to admit Washington, D.C., as a state, while the other will take up a measure that would create a commission studying reparations for descendants of slaves.
Listen now to WTOP News WTOP.com | Alexa | Google Home | WTOP App | 103.5 FM

▶ Watch Video: Inside the push for D.C. statehood

Washington — Two House committees took up measures long championed by progressives on Wednesday, signaling that congressional Democrats are willing to move forward with their priorities despite narrow majorities in the House and Senate. One panel voted to advance a bill to admit Washington, D.C., as a state, while the other approved a measure that would create a commission studying reparations for descendants of slaves.

The D.C. statehood bill considered by the House Oversight Committee is broadly popular among Democrats, with 215 cosponsors. An identical version of the bill passed the House last year, but stalled in the Senate, where then-Majority Leader Mitch McConnell refused to bring it to the floor for a vote.

After almost five hours of debate on multiple amendments brought by Republicans, the Oversight Committee voted to advance the bill by a vote of 25 to 19 along party lines. None of the amendments were accepted, and there will be a vote on the House floor next week.

“The United States is a republic, but its capital lacks full representation. The United States is the only democratic country that denies both voting rights in the national legislature and local self-government to the people of its capital. That is wrong. It violates everything we stand for as Americans,” Oversight Committee Chair Carolyn Maloney said in her opening statement.

The legislation, titled H.R. 51, would create the State of Washington, Douglass Commonwealth, named after Frederick Douglass. It would give D.C. two U.S. senators and a voting representative in the House, like every other state. The bill would also cordon off the White House, Capitol and National Mall to remain under federal control as the seat of the U.S. government. 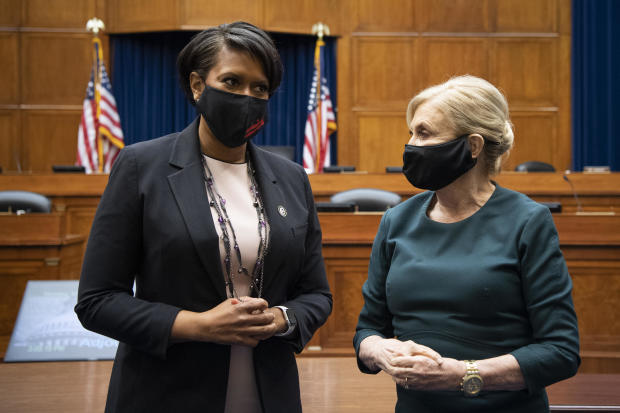 Washington Mayor Muriel Bowser and Chairwoman Carolyn Maloney talk at the end of the House Oversight and Reform Committee hearing on H.R.51 on Monday, March 22, 2021.

The district pays more in federal taxes than 22 states, and more per capita than any state, and it has a population of nearly 700,000 people, larger than the populations of Wyoming and Vermont. But district residents have no voting representation in Congress, although Eleanor Holmes Norton represents D.C. in Congress as a non-voting delegate.

But Republicans have characterized the push for D.C. statehood as an attempted power grab by Democrats. The district has a plurality Black population and is overwhelmingly Democratic. Republicans argue that if D.C. is admitted as a state, it would upset the balance of power in Congress by adding two Senate seats that would most likely be held by Democrats.

Meanwhile, the House Judiciary Committee took up a bill on reparations. After hours of debate stretching late into the night, the bill was approved by a vote of 25 to 17, setting up the first floor vote on the measure since its introduction in 1989.

“This legislation is long overdue,” said Judiciary Committee Chair Jerry Nadler on Wednesday. “H.R. 40 is intended to begin a national conversation about how to confront the brutal mistreatment of African Americans during chattel slavery, Jim Crow segregation and the enduring structural racism that remains endemic to our society today.”

H.R. 40, would establish a commission to examine the implications of slavery from 1619 to the present and develop reparations proposals for African Americans. The “40” refers to a promise by the U.S. military for 40 acres and mule to be provided to former slaves after the Civil War. The order was reversed in 1865, allowing the plantation owners who once owned the land to return, but the pledge by the U.S. government to assist freed slaves has not been forgotten by their descendants.

“This is what we call the next step,” Representative Sheila Jackson Lee, the lead sponsor of the bill, told CBS News in an interview. “America has never acknowledged the original sin, and that if you look at African Americans today, the disparities that were entrenched in slavery still exist.”

Although these bills are expected to be approved in both committees and advance to a full vote on the House floor, they will likely stall in the Senate, where Democrats hold a razor-thin majority. Most legislation requires 60 votes to advance in the Senate, and Democrats only hold 50 seats. Neither of these bills is likely to get support from the requisite 10 Republicans needed to advance the measures to a full vote on the Senate floor.

Some progressives are pushing for the Senate to eliminate the filibuster, which would allow measures to advance with a simple majority. The advocacy group 51 for 51 argues that it is necessary to end the filibuster in order for D.C. to be admitted as a state — 51 votes for the 51st state.

“We’re eager for H.R. 51 to have a full House vote next week, but we have our eyes on the Senate to finally correct this 200-plus year old stain on our democracy,” 51 for 51 campaign director Stasha Rhodes said in a statement.

However, eliminating the filibuster would require support from all 50 Democrats in the Senate and Vice President Kamala Harris to cast the tie-breaking vote, and at least two Democrats have signaled that they will not vote to do so. Senator Joe Manchin said in an opinion piece last week that “there is no circumstance in which I will vote to eliminate or weaken the filibuster,” all but dooming the prospects for bills such as H.R. 51 and H.R. 40 in the Senate.