U.S. Capitol Police officer William “Billy” Evans will lie in honor in the Capitol Rotunda on Tuesday during the second such memorial ceremony this year for a police force that has edged close to crisis in the wake of the Jan. 6 riot. Evans was killed April 2 when a vehicle rammed into him and another officer.
Listen now to WTOP News WTOP.com | Alexa | Google Home | WTOP App | 103.5 FM
(1/19) 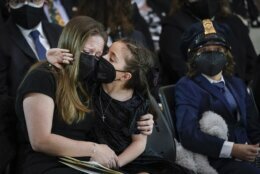 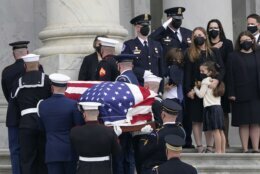 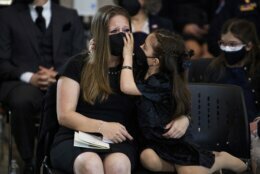 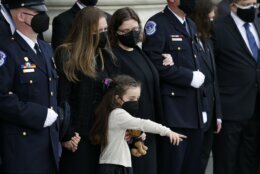 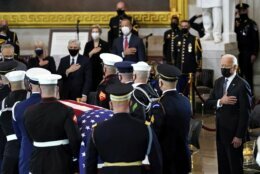 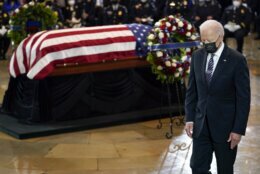 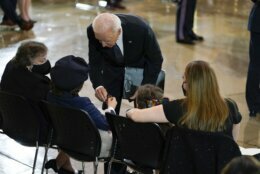 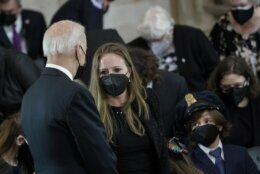 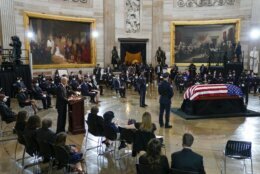 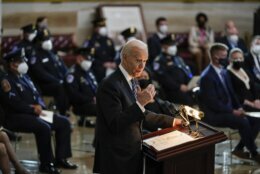 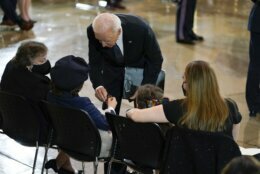 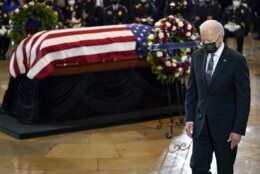 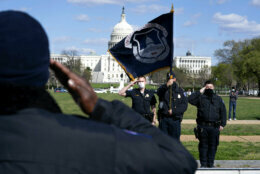 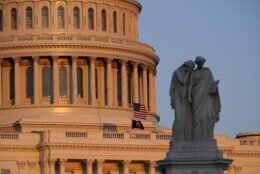 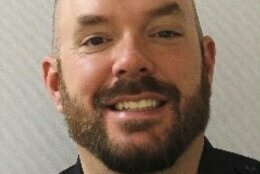 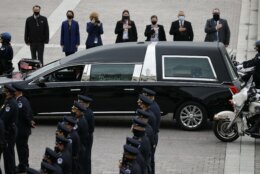 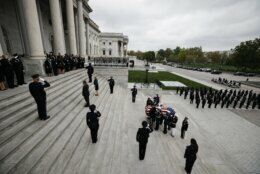 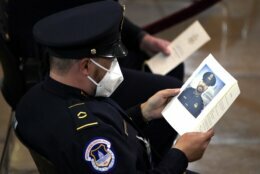 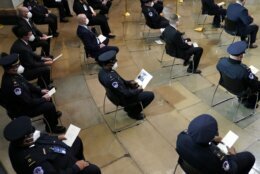 WASHINGTON (AP) — President Joe Biden said Tuesday that “never has there been more strain” on the U.S. Capitol Police as he honored Officer William “Billy” Evans, the second officer on the force to die in the line of duty this year.

Evans, who laid in honor in the Capitol Rotunda, was killed earlier this month when a driver struck him and another officer at a barricade outside the Senate. His death compounded the anguish of a police force already mourning the loss of Officer Brian Sicknick, who died after his encounter with rioters during the Jan. 6 insurrection. Another officer, Howard Liebengood, died by suicide in the days after the Capitol attack.

The deaths have taken a toll on the force, which has been overworked and understaffed as leaders try to figure out how to move forward from the mistakes of Jan. 6. The Capitol Police were massively unprepared as supporters of former President Donald Trump violently pushed past them and broke into the building that day. In the weeks and months since, top leaders have resigned, and many have considered leaving the department. Officials have brought in trauma therapists, and lawmakers are considering what more they can do.

Sicknick and Evans are two of only six Capitol Police officers who have been killed in the line of duty in the force’s nearly 200-year history, according to the department. Evans had been on the force for 18 years.

Biden, speaking at the service in the Rotunda attended by congressional leaders and Evans’ fellow officers, said he had never seen as much “strain and responsibility” put on the department in the nearly 50 years since he first came to Capitol Hill as a senator. And yet, he said, “you watch them do their duty with pure courage and not complain.”

Evans, 41, was remembered for his dedication to country, love for his job and his mischievous sense of humor. His children, 7-year-old Abigail and 9-year-old Logan, sat with their mother and grandmother at the service and clutched small replicas of the Capitol. At one point, Abigail dropped hers, and Biden stood to retrieve it. Near the end of the ceremony, the girl tried to wipe away her mother’s tears as a U.S. Army chorus sang “Bridge Over Troubled Water.”

Logan wore a police cap and hugged a stuffed animal as Biden and congressional leaders eulogized his father and said prayers for his family. He continued to clutch it as the family paid respects in front of the casket and walked out of the ceremony.

Biden, who also met with the family privately, said Evans was “defined by his dignity, his decency, his loyalty and his courage,” and he spoke of his own experience losing two children.

In eulogizing Evans, Senate Majority Leader Chuck Schumer and House Speaker Nancy Pelosi spoke directly to the officers. Schumer told them that there is “no shame in grief and sorrow and shock” and that members of Congress grieved with them.

“To Billy’s friends on the Capitol Police force, these past few months have been devastating,” Schumer said. “Just as the scars of Jan. 6 had begun to heal, another wound had opened.”

Investigators believe that the driver who killed Evans had been delusional and increasingly having suicidal thoughts. Noah Green, 25, emerged from the car with a knife and was shot to death by another police officer.

As the hearse carrying Evans’ flag-draped casket entered the Capitol complex before the ceremony, members of the National Guard lined the street and saluted. His former colleagues gathered on the East Front of the Capitol while church bells rang in the distance. His family, including his two children, watched as his casket was carried ceremoniously up the Capitol steps.

The family said in a statement through the police earlier this month that most important in Evans’ life were Logan and Abigail.

“His most cherished moments were those spent with them — building with Lego, having lightsaber duels, playing board games, doing arts and crafts, and recently finishing the Harry Potter series,” the family said. “He was always so eager to show how proud he was of everything they did.”

The family said that Evans was proud of his work and that his friendship with colleagues near the north barricade of the Capitol complex was one of the best parts of it.

“We hold them in our hearts, as we know they acutely share our grief,” they said.

Those other officers — including Ken Shaver, who was injured alongside Evans and was wearing a walking boot on his foot — sat together at the service. They were among the first to pay their respects as the ceremony ended.

Evans laid in honor throughout the day on Tuesday as lawmakers, law enforcement officers and others — including Vice President Kamala Harris — filed by and paid their respects. He is only the sixth person to lie in honor in the Capitol Rotunda. It is a designation given to those who are not elected officials, judges or military leaders.

Lawmakers from both parties who are investigating the Jan. 6 attack say that the Capitol Police are nearing crisis and more must be done to help them.

“This is a group of men and women who’ve been through an overwhelming amount of trauma over the last few months,” said Rep. Tim Ryan, D-Ohio, who heads a spending committee that oversees the Capitol Police. “The loss of Officer Evans is yet another stark reminder of what our brothers and sisters in uniform risk every day to protect us. The honor of lying in state under the Capitol dome is befitting of this American hero.”