A man who told someone he matched with on a dating app that he stormed the U.S. Capitol was arrested by the FBI in New York on Thursday.
Listen now to WTOP News WTOP.com | Alexa | Google Home | WTOP App | 103.5 FM

A man who told someone he matched with on a dating app that he stormed the U.S. Capitol was arrested by the FBI in New York on Thursday.

According to court filings, an individual contacted the FBI on January 13, about a week after a violent mob stormed the Capitol, with information about someone who allegedly participated in the unlawful entry to the building.

The person said Robert Chapman of Carmel, New York, had met on Bumble, a dating app, and during their text conversation stated: “I did storm the Capitol.”

Screenshots of the conversation provided to law enforcement show that Chapman told his match he “made it all the way to Statuary Hall” during the storming of the building. 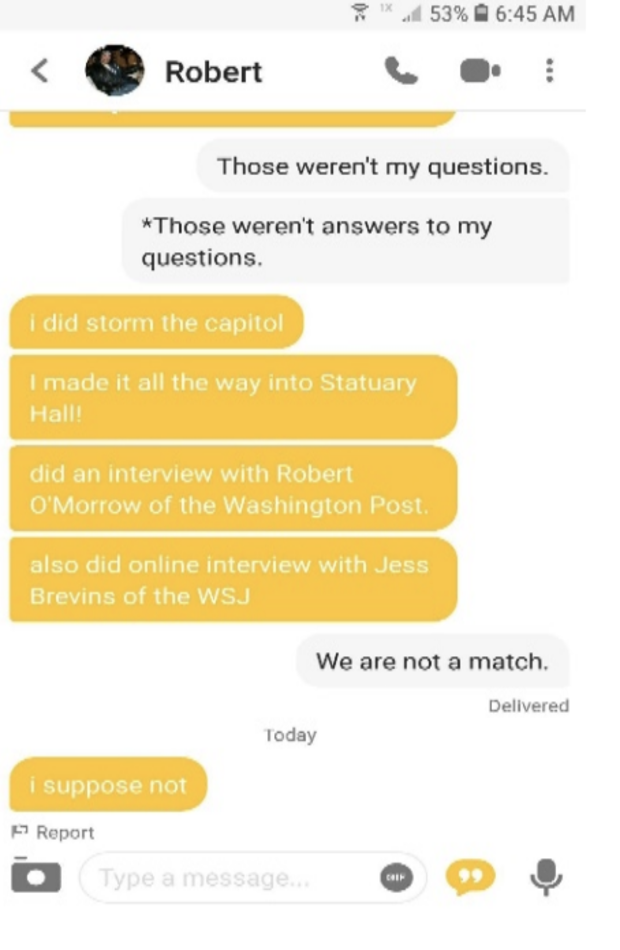 A screenshot of Chapman’s conversation on Bumble, provided to law enforcement by his match on the dating app.

His Bumble match then said: “We are not a match,” to which Chapman replied: “I suppose not.”

The FBI reviewed body-camera footage from the Metropolitan Police Department, recorded during the riot on January 6, according to the court document by Kenneth Kroll, who is part of the FBI Task Force Office.

In the video, Chapman is seen filming the activity inside of the U.S. Capitol on his phone. The FBI compared images of Chapman at the Capitol with a photo of him taken at the time of his 2017 arrest in New York.

The FBI also received more information from the Bumble match, who said a Facebook post appeared to show Chapman in Statuary Hall, inside of the U.S. Capitol Building. 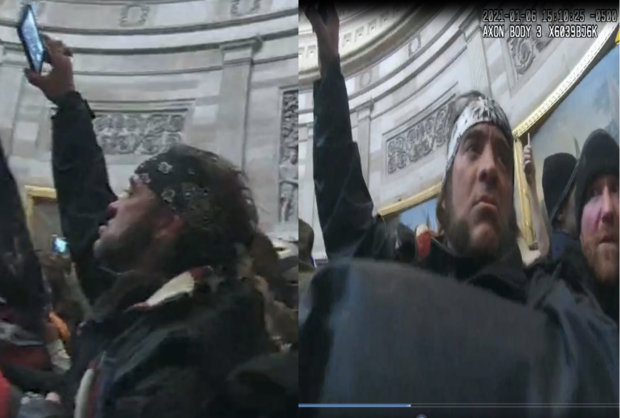 In the Metropolitan Police Department body-camera video, Robert Chapman is seen filming the activity inside of the U.S. Capitol on his phone.

Metropolitan Police Department via the FBI

The FBI also found other Facebook posts that appear to be posted by Chapman under the name Robert Erik, in which he brags about being inside the Capitol, writing: “I’M F****** INSIDE THE CRAPITOL!!!”

The filing argues the evidence shows Chapman likely also knowingly entered or remained in a restricted building and willfully and knowingly uttered loud, threatening or abusive language, or engaged in disorderly or disruptive conduct, at the Capitol Building on January 6 “with the intent to impede, disrupt, or disturb the orderly conduct of a session of Congress or either House of Congress.” Chapman was is charged with knowingly entering or remaining in a restricted building and violent entry and disorderly conduct on Capitol grounds.

Dozens of other Capitol riot suspects were reported to authorities by their own close personal contacts. According to court documents, the FBI has arrested many based on tips from family members, work colleagues, childhood friends and ex-lovers who called authorities after watching their acquaintances participate in the siege on TV or, in some cases, on the rioters’ own social media accounts.