Fencing around outer perimeter of U.S. Capitol complex comes down

More than two months after the attack on the Capitol, security fencing around the perimeter of the complex has been taken down, U.S. Capitol Police announced on Wednesday.
Listen now to WTOP News WTOP.com | Alexa | Google Home | WTOP App | 103.5 FM

“All of the fencing that surrounded the outer perimeter of the U.S. Capitol Complex has been removed. Affected roads have reopened. The USCP is ready to quickly ramp up security at a moment’s notice, if needed,” U.S. Capitol Police said on Twitter. “The inner perimeter fence, around the Capitol Building, is still in place, while the Department works with our congressional stakeholders and law enforcement partners to strengthen our security posture.”

The fencing was put in place after a violent mob laid siege to the Capitol in a deadly attack on January 6, resulting in the deaths of five people, including a Capitol police officer. Two other Capitol police officers died by suicide after the attack. Many of the rioters explicitly sought to harm or assassinate members of Congress and former Vice President Mike Pence, who was present at the Capitol that day. 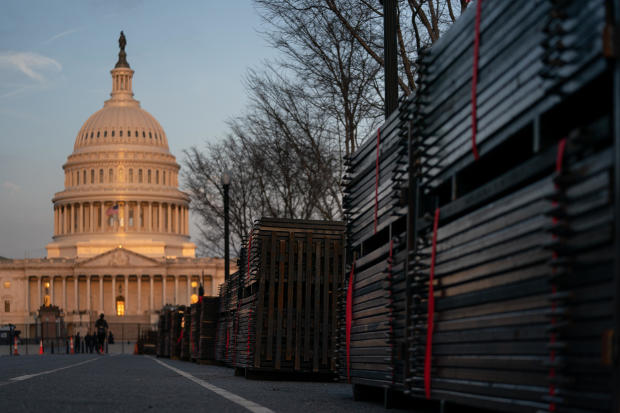 Stacks of disassembled security fencing outside the U.S. Capitol in Washington on Tuesday, March 23, 2021.

Earlier this month, U.S. Capitol Police requested more than 2,000 National Guard troops to stay in Washington, D.C., for up to 60 days to support Capitol Hill.

Acting U.S. Capitol Police Chief Yogananda Pittman also called for the erection of permanent fencing around the Capitol in late January, arguing that “vast improvements to the physical security infrastructure must be made to include permanent fencing, and the availability of ready, back-up forces in close proximity to the Capitol.”