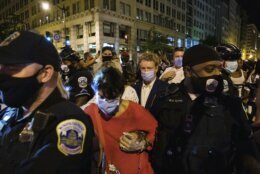 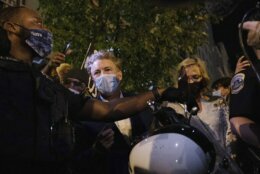 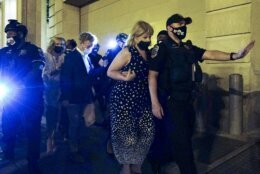 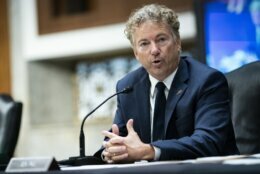 WASHINGTON (AP) — Sen. Rand Paul, who was surrounded by screaming protesters when he and his wife left President Donald Trump’s Republican National Convention speech at the White House, claimed without evidence on Friday that he had been “attacked by an angry mob” of the type that would be unleashed in Joe Biden’s America.

A video of the encounter with the protesters, who were yelling for Paul to say Breonna Taylor’s name, shows no attack on Paul, only a police officer who was jostled while carrying a bicycle and then stumbled into the Kentucky senator’s shoulder.

Police and other security personnel formed a cordon around Paul and his wife as they left the White House shortly after midnight to walk a few blocks to their hotel, and the couple didn’t appear to come into physical contact with the protesters and were unharmed.

Still, Paul tweeted that he “Just got attacked by an angry mob of over 100, one block away from the White House,” and he thanked police for “literally saving our lives from a crazed mob.”

In a television appearance on Friday, Paul linked the encounter with the protesters to lawlessness and a movement to defund police departments and said nobody would be safe in America if Biden, the Democratic presidential nominee, wins the White House.

“We can’t have Joe Biden rule the country and have no police,” Paul told Fox News Channel’s “Fox & Friends.”

Biden has said he does not want to defund police departments and claims Trump has proposed cutting money for local police support. Biden said he favors increasing funding for local police forces and deploying more social workers into police work.

Paul alleged, without offering any evidence, that the demonstrators were paid to create trouble on the streets of the nation’s capital.

“I think we’re going to find out that these people are hired and from out of town, specifically in our case,” Paul claimed.

The protesters were shouting for the Kentucky senator to acknowledge Taylor, who was shot and killed by police officers who used a battering ram to knock down the door of her Louisville apartment. Paul said that was ironic because he proposed legislation that would end no-knock raids. The legislation, named after Taylor, died in the Senate.

Protesters on Friday shouted “No Justice, No Peace” and “Say Her Name” before one appeared to briefly clash with an officer, pushing him and his bike backward, sending the officer into Paul’s shoulder.

Taylor’s name has been a rallying cry among demonstrators during recent protests against racial injustice and police brutality. The 26-year-old emergency medical technician was shot multiple times March 13, when police officers burst into her apartment using a no-knock warrant during a narcotics investigation.

The warrant to search her home was in connection with a suspect who did not live there, and no drugs were found.

Videos showed other attendees of Trump’s RNC speech being confronted by protesters after leaving the event.

Paul said there’s “something going on here” and the FBI “needs to be involved.”

“I promise you that at least some of the members and the people who attacked us were not from D.C.,” he said. “They flew here on a plane. They’ve all got fresh new clothes, and they were paid to be here. It’s a crime to do that, and it needs to be traced. The FBI needs to investigate.”

This story has been corrected to show Paul’s tweet thanked police for “saving our lives,” not “saving his life.”