Super Bowl Sunday is ‘Christmas’ for Wingo’s in Georgetown

Mike Arthur, the owner of Wingo's in Georgetown, was "Lord of the Wings" on Super Bowl Sunday. See photos and video of the restaurant's bustle as they churned out tens of thousands of the Super Bowl food staple.
Listen now to WTOP News WTOP.com | Alexa | Google Home | WTOP App | 103.5 FM
(1/8) 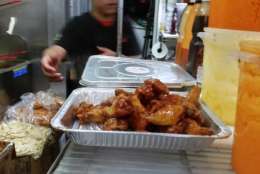 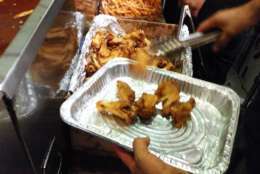 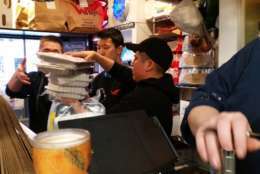 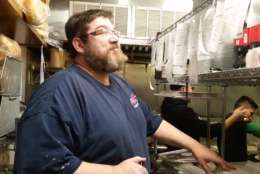 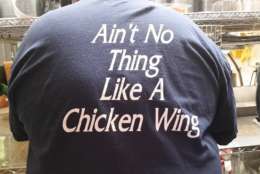 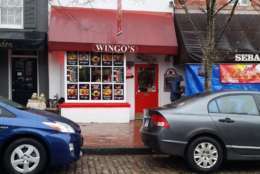 And on Sunday, “Lord of the Wings” Mike Arthur, the owner of Wingo’s in Georgetown, was behind the Super Bowl food staple for many in D.C.

With business tripling that of a normal football Sunday, he calls Super Bowl Sunday the “Christmas of the Chicken Wing business.”

Wingo’s began taking orders for Super Bowl Sunday two weeks in advance, so they prepared the hot sauces beforehand. But with the chicken delivered just a day before the big game, everything is fresh and natural, he said.

By early Sunday, Wingo’s had already completed orders of 21,000 wings and Arthur said the restaurant expects orders for another 10,000.

Forget the fries and sandwiches, 99 percent of the orders are for wings on Super Bowl Sunday, he said.

Everything is made to order, and all customers — including Homeland Security, the World Bank and the Secret Service — want their orders by 6 p.m., just in time for the start of the game, according to Arthur.

“So that’s why we have everything on, everyone working. So now it’s cook time … just fry, fry, fry baby,” Arthur said. And while Wingo’s offers many flavors, “It’s like ice cream; everyone sticks to basics — mild and hot.”

Arthur and his team are no rookies. This is Arthur’s 16th Super Bowl cooking up orders of wings in Georgetown.

“Wingo’s has been here for a long time. We’ve seen it all. We were here during the one Snowmageddon (February 2010),” said Arthur.

And because the Redskins won’t be playing, “I don’t have to worry about anyone taking off to watch the game … ’cause we’re never in the Super Bowl,” laughed Arthur.