A new coalition is working to make biking around the D.C. area easier in the future by helping form connections between the region's trail.
Listen now to WTOP News WTOP.com | Alexa | Google Home | WTOP App | 103.5 FM
(1/5) 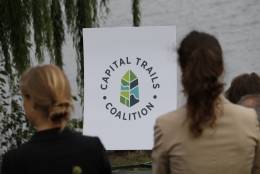 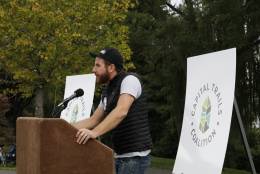 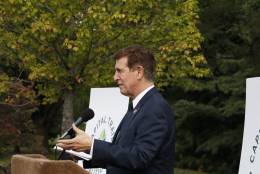 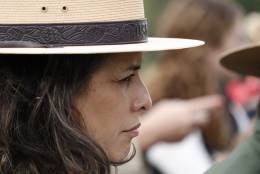 WASHINGTON — A new coalition is working to make biking around the D.C. area easier in the future by helping form connections between the region’s trail.

At the foot of the Merchant Marine Memorial just off the Mount Vernon Trail, Washingtonians in business suits, cycling gear and jeans and T-shirts gathered Thursday for the announcement of the newly formed Capital Trails Coalition.

“D.C. already has an incredible infrastructure of trails, but they don’t connect,” Matt Liddle, with outdoor retailer REI, explained the coalition’s plan is to work to tie those trails together.

“I’m proud to announce that REI is investing a half-million dollars over the next three years,” he told the crowd.

REI is days away from opening a flagship store in D.C., and Liddle said linking the region’s network of trails makes sense and is part of what the retail outlet — which is a cooperative owned by members — is all about.

Rep. Don Beyer, D-Va., pointed out how the growth of bike commuting has changed traffic patterns — and expectations. He mentioned how the growing popularity of several Virginia commuter trails has resulted in plans for plowing those trails in the winter.

“When I see them, as I’m in my car, I’m very grateful because they’re taking cars off the road,” Beyer said.

Beyer, who owns car dealerships, adds several of his dealerships actually offer bikes as “loaners” when customers bring their cars in for repairs or maintenance.

Greg Billing, executive director of the Washington Area Bicyclist Association, says the coalition brings together agencies and groups such as the National Park Service, the Rails-To-Trails Conservancy and the region’s Departments of Transportation to knit the network of trails together in a way that hasn’t been done before.

But in the coming months, the various representatives will be working on creating a vision of what that network should look like, and how to go about creating the links.