Coronavirus News: Fairfax Co. votes to increase substitute teacher pay | Is it time to get a COVID-19 booster? Which one? | Local cases of COVID-19 | How many in DC region are vaccinated?
Home » Washington, DC News » Muslim leaders at DC…

At a historic African-American Muslim mosque in D.C., Muslim leaders remember him not as a boxing legend but as an important Muslim role model.
Listen now to WTOP News WTOP.com | Alexa | Google Home | WTOP App | 103.5 FM
(1/3) 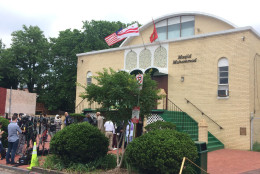 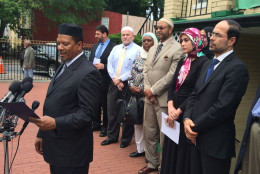 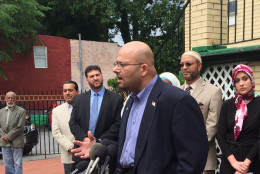 WASHINGTON — At the Masjid Muhammad Mosque — an important place of worship in the history of African-American Muslims — Muhammad Ali has been remembered as an inspiration of faith and a catalyst in the growth of Islam in the United States.

“We would not have been able to achieve the … building of the Muslim community in North America without the help of leaders like Muhammad Ali. He was a bridge between the African-American Muslims and the Muslims coming from different countries as immigrants,” said Sayyid Syeed, national director of the Islamic Society of North America, which is the largest Islamic organization in the U.S.

Muslim American leaders gathered at the mosque that calls itself “The Nation’s Mosque” — founded in the Shaw neighborhood of D.C. in 1937 by one-time leader of the Nation of Islam Elijah Muhammad, a mentor to Ali.

“This is certainly an appropriate place to be; this is an 80-year community,” said Imam Talib Shareef, president of Masjid Muhammad. “We were the first group of Muslims that really lifted up the American flag and Muhammad Ali was right along with us,” he added.

The Muslim leaders praised Ali for his steadfast faith, his humanity and leadership.

“We believe Muhammad Ali was a gift from God: not only to Muslims, but to the world,” said Nihad Awad, national executive director of the Council on American-Islamic Relations.