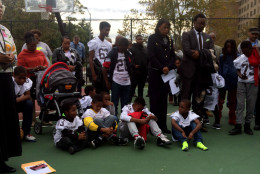 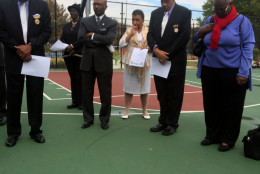 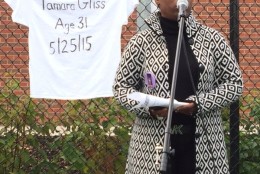 WASHINGTON — There have been 128 homicides in D.C. so far this year. Sadly, Tamara Gliss, a mom, was one of the statistics.

On Memorial Day, the 31-year-old was gunned down in the 600 block of O Street Northwest, one of the killings that has propelled the District’s homicide rate to its highest level in five years. Police have asked the public to help solve the case, and are offering a $25,000 reward for information leading to the killer.

Meanwhile, her heartbroken mother wants justice, and some people in the Shaw community are rallying behind her, pleading for an end to the deadly violence.

“I’m not going to let my daughter’s death be in vain. Someone out here knows something,” Sandra Gliss said during a rally Sunday on the basketball court of the Kennedy Recreation Center, not far from the place her daughter was gunned down.

“She came to all my games. She used to come on the field when I was hurt. She used to pick me up and make me play again,” Devontae said.

While mourning Tamara Gliss’s death and urging the public to provide information to police to find her killer, members of the community also are looking for ways to curb deadly street violence in D.C.

“One thing that we have to do is get our community to stand up for itself. If you see something, say something,” said Thomas Bowen, a minister at Shiloh Baptist Church.

“There’s a common enemy and that enemy is the easy access to guns,” Bowen said.

Ibrahim Mumin, a business executive, active in the Shaw community, borrowed lyrics from Michael Jackson’s song, “Man in the Mirror,” and said that in order to reduce the violence, people must stop blaming others.

“In order to make the world a better place, take a look at yourself, and then make a change,” Mumin said.

Some of the rally’s attendees said the road to less street violence starts at the home, where children must be taught the fundamentals of good behavior. “Parents teaching the children how to resolve situations, good manners, simple solutions,” said Dr. Viola Bradford, an associate minister of New Bethel Baptist Church.

Sandra Gliss agreed that more efforts are needed in the home.

“Respect is everything and you’ll get a long ways with respect,”she said.

With monkeypox cases reported in DC, who’s at risk and where to get the vaccine