FOXBOROUGH, Mass. (AP) — Yeferson Soteldo, Kemar Lawrence and Tsubasa Endoh scored in the first half and Toronto FC snapped a six-game losing streak with a 3-2 victory over the New England Revolution on Wednesday night.

Soteldo opened the scoring in the ninth minute by capitalizing on a mistake by goalkeeper Brad Knighton, who came out of his area but couldn’t clear it. Knighton was playing in his first game since March 7, 2020.

Lawrence scored on a breakaway in the 15th, and Endoh curled in a shot from the corner of the 18-yard box in the 24th for a 3-0 lead.

New England, which entered 5-0-0 at home, had two good scoring chances in the first half but Adam Buksa had a header go off the crossbar in the 34th and Gustavo Bou sent a shot off the post in the 37th.

Carles Gil scored for New England in the 56th by bending a shot over the wall on a free kick, and Buksa headed in a cross from second-half substitute Emmanuel Boateng in the 78th.

The start was delayed nearly 90 minutes because of lightning. 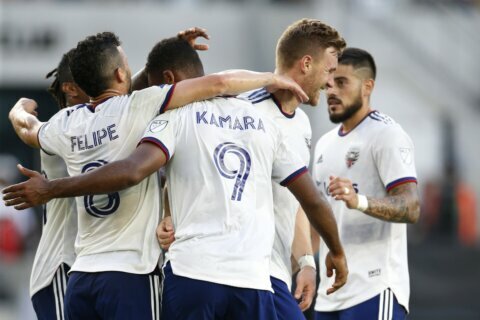