Instead of crawling along in traffic from Burtonsville to Silver Spring, plans to make Route 29 Maryland's first bus rapid transit corridor could allow some commuters to zip past those stopped cars within three years.
Listen now to WTOP News WTOP.com | Alexa | Google Home | WTOP App | 103.5 FM

ROCKVILLE, Md. — Instead of crawling along in traffic from Burtonsville to Silver Spring, plans to make Route 29 Maryland’s first bus rapid transit corridor could allow some commuters to zip past those stopped cars within three years.

A Montgomery County Council committee signed off Thursday on $7.5 million to design the county’s section of the U.S. 29 system and move forward with more preliminary work for a future “Flash” route along Md. 355 (Rockville Pike/Wisconsin Ave.) between Clarksburg and Bethesda.

Howard County is beginning its own planning process that would extend the line up Route 29 to Columbia.

“All the way into Silver Spring that place is bollocksed up,” longtime BRT supporter Montgomery County Councilmember Marc Elrich said. 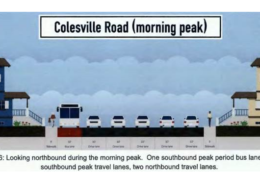 The current plan, which is set to put 14 buses on the road in Montgomery County by late 2019, would see the express buses run on the shoulders of Route 29 between the Burtonsville Park and Ride and Industrial Drive and in regular traffic between and downtown Silver Spring. The county projects the buses running every 15 minutes outside rush hour and twice as often during rush hour would draw about 13,000 daily weekday riders in 2020 (nearly 4,000 of them new transit riders who would otherwise drive) and 20,000 in 2040 after additional development happens in and around White Oak.

While the buses would save significant time for commuters riding the length of the corridor by running on the shoulder at the northern end of the route, Elrich and other supporters believe a dedicated lane along much of the rest of the line is crucial to making it a dramatic improvement over today’s options.

“I am happy with this as long as it’s accompanied by the second step so it actually works the way it’s supposed to work,” he said.

The Transportation, Infrastructure, Energy and Environment Committee directed the Montgomery County Department of Transportation to come up with a plan for a detailed study of how to implement dedicated lanes for the buses.

“To the extent to which we can provide what many of us hoped to be able to provide, which is dedicated lane as far as possible, but certainly that southern tranche there, if we can do that then we are talking about a quality of service that no one can contest, and there will be issues in terms of people getting in and out of their neighborhood that we can — as other communities have — address at the appropriate time,” he said.

Montgomery County Transportation Director Al Roshdieh promised that all design of the initial system and any additional dedicated lanes would go through an extensive, effective, honest and interactive public comment and outreach period.

Councilmember Tom Hucker, who represents the Route 29 area, said there has been significant confusion about what is moving forward now.

The county expects to contribute $21.5 million in total for the initial project, which includes safety improvements for people walking or biking in the area. The federal government has also agreed to provide a $10 million grant for the 11-station Montgomery County portion of the route. The precise locations for each station are due to be worked out in this next phase of the planning process.

“There’s more and more people, if we do nothing, that are going to be populating not just eastern Montgomery County, but Howard County, northern Prince George’s County, western Baltimore County, and still working in the D.C. metro region, so, to me, doing nothing is a guarantee that we increase congestion,” Hucker said.

Councilmember Nancy Floreen suggested that the county needed to slow down on planning so more people could weigh in on the project, but also complained that the entire process has taken too long.

“I’m embarrassed for us that it’s taken us all this money and this time to come around to where this sort of started,” she said.

The state of Maryland led an initial round of studies, and the county is now taking over the planning process.

“We’ve spent many millions of dollars, say 5 … but you know if I’m a member of the community, I’d say ‘what are these people doing’?,” she said.

In addition to the Route 29 bus rapid transit project, the county plans at some future date to improve bus service along Viers Mill Road between Rockville and Wheaton, Route 355 between Clarksburg and Bethesda, and along the long-planned route of the Corridor Cities Transitway between the Shady Grove Metro Station and the Metropolitan Grove MARC station.