A woman who helped her father cover up his wife's 2018 murder with a tale of a knife-wielding panhandler has been sentenced to five years in prison.
Listen now to WTOP News WTOP.com | Alexa | Google Home | WTOP App | 103.5 FM

BALTIMORE (AP) — A woman who helped her father cover up his wife’s 2018 murder with a tale of a knife-wielding panhandler has been sentenced to five years in prison.

Valeria Smith was sentenced Monday, two years after pleading guilty to acting as an accessory after the slaying of Jacquelyn Smith, admitting that she ditched her stepmother’s purse at a bus stop to support the panhandler story, The Baltimore Sun reported.

Keith Smith told police his wife, an engineer at an Army facility, was knifed by a man after handing $10 to a female panhandler who appeared to be holding a baby. Smith’s version of his wife’s slaying drew national attention, as he and his daughter, gave tearful interviews. Oprah Winfrey, once a newscaster in Baltimore, tweeted that the tragic case would make her reconsider handing out cash to panhandlers.

Eventually the story fell apart as details in Smith’s story changed and investigators reviewed surveillance camera footage along the Smiths’ supposed route that night and didn’t see their vehicle or the panhandlers, prosecutors said.

Valeria Smith testified last week at her father’s trial that her stepmother was dozing in the front passenger seat when her father stabbed her. Afterward, Keith Smith coached his daughter on what they would tell police.

Keith Smith was convicted Thursday of first-degree murder and faces life in prison at sentencing on Feb. 28.

Valeria Smith had been locked up nearly three years while awaiting her sentence. 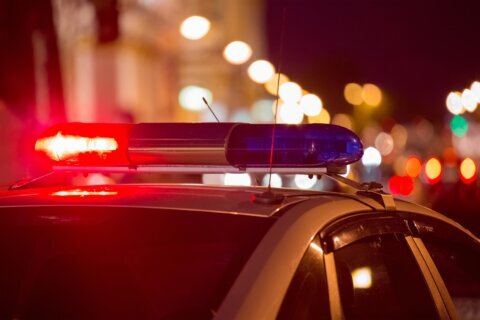